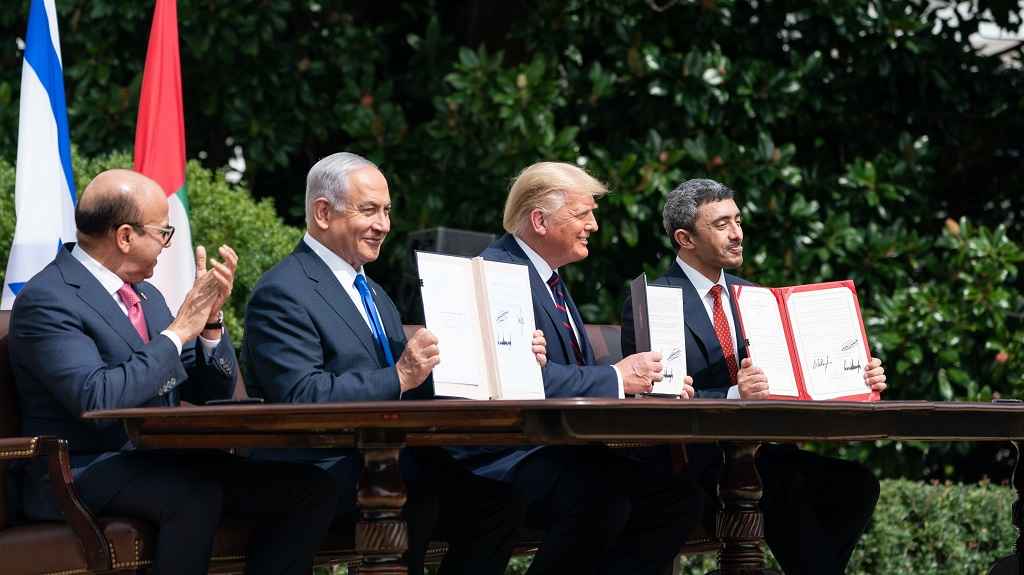 Normalization Gets Israel Peace But What Do Arabs Get?

November 30, 2020 7:34 pm 0
Syrian-American Stands Accused of Terrorism on US Soil
It Took US Congress Almost 10 Years to Come After Assad
Of Camel Races Rifts and Culture

Much has been written about the latest Gulf-Israel Normalization the Trump Administration engineered in pursuit of peace and to counter Iranian terror in the region. While Normalization gets Israel peace what do the Gulf and the rest of the Arab world get ion return other the protection of dictatorship?

Yes, it is peace for Israel and its citizens but the Arab rulers in the Gulf could care less about the prosperity of their people, which stand to benefit very little from such a Normalization.

In the Middle East, corrupt dictators have discovered there is only one rule to apply for surviving the anger of their people: Harvest the goodwill of Israel to protect their back in Washington. Without that protection, none of these desert countries that exist as a patchwork of lands oozing with oil and gas would ever survive the cut-throat realities of geopolitics. While the CIA watches their back, these Arab rulers are running an air conveyor-belt transporting Russian prostitutes to ease the pains of their overwhelming difficult existence. All paid for by the treasure they raided and consider to be part f their personal net worth.

When Iran came knocking with missiles, the Arab dictators saw the convenience of normalizing their relations with Israel. After all, all of them remember the Barack Obama era when not even their own personal lobbying mattered to halt the Iran Deal. If they are unable to have any influence on Washington, why not buy that influence with a pretend-game called Normalization. In return for looking so majestically peaceful, they would become full partners in a process they could only envy from afar few months ago.

They normalized their relations with Israel to save their own skin because Iran is slowly breaking their doors down.

WHAT DO THE ARABS REALLY GET WITH NORMALIZATION?

What do the men or women on the Arab streets, the majority of whom have embraced Islam, in a variety of ways, in the last forty years, to symbolize an escapist mentality from their impoverished, helpless existence get when their rulers normalize their relations with Israel? Well, they get the good, the bad, and the ugly. Mostly, the ugly though.

If their rulers are violent dictators with a penchant to emulate the chainsaw massacre scenario, like Mohammad bin Salman, who met Israeli Prime Minister Benjamin Netanyahu and who has embraced secret normalization, their people get a ruthless ruler whose prisons would make Franco look like a toddler. And if their rulers are benign dictators, they would get benign continuity into a world of oblivion. In other words, Israel gets peace and Arabs get to live in the whimsical and chaotic world of their dictators. Their lives remain stagnant and their economic conditions remain a magnet for radicalization.

Israel gets to enjoy Normalization on two fronts. Arab partners it can rely upon to conduct an effective war against Iran, and a big sigh of peace at home. Arabs, on the other hand, get to live under the same conditions they started with lacking education and economic parity to compete in the world economies. For all intended purposes, Arabs get a goat and an open desert to roam freely. Then one wonders how come Islam has such a hold on the masses.

One might even say that Normalization helps kick the can of extremism down the road while making it downright more difficult to win against in the future.

But how do you control 500 million Arabs that have been neglected for so long and now fully radicalized in favor of Normalization or some other twist in the road?

The future of Arab dictators and their societies look very bleak indeed. Other than oil and camel beauty contests, their economies will collapse the day their oil and gas deposits are depleted. Say 50 years or so. Back to the tents they will go. When that happens, who will Israel trade with then? Who will consume its goods and services when the blooming desert is surrounded by zombie land? Today, the threat of Iran imposes certain policy bifurcations, but if there are no plans to embrace during times of peace to change the Arab landscape, the societies we see before us will radicalize further before imploding. Those in the know do know that the Arab violent dictators are the number one source of Islamization of the region.

Today, the U.S. can attempt to eradicate the few thousand Muslim extremists morphing every few years again and again with different names and styles. Not an easy job but doable even though the radicals are not going away. But how do you control 500 million Arabs that have been neglected for so long and now fully radicalized in favor of Normalization or some other twist in the road? No one wants to admit that this elephant in the room, fully manufactured by the dictatorial and often violent regimes of Arab rulers, will one day become an enraged elephant in the china shop of the region.

How much poverty and ignorance before the United States and Israel see the dead-end tunnel of violent and simpleton Arab rulers misgoverning their Arab masses?

By normalizing their relations with the Gulf, Israel, for a short-term goal, is complicating future problems. We are not saying normalization is bad, or that we should not applaud it and support it, but for heaven’s sake, think of the 350 million hapless and uneducated Arabs the world is abandoning to a fate one may not be able to control later on. Today, they are a neglected Arab ruler burden, tomorrow they will become everyone’s burden.

How much poverty and ignorance before the United States and Israel see the dead-end tunnel of violent and simpleton Arab rulers misgoverning their Arab masses? If the west continues to neglect the fate pf the Arab street in favor of short-term band-aid solutions, the lack of education Arabs suffer from will lead to a black hole smack in the middle of our civilizations.

The west must pay attention to the Arab masses to build their own future using their own ambitions, brains, and the will to turn failures into successes. Today’s Arab dictators, all simple-minded men, will never rise to the occasion of seeing their people achieve greatness. Such would threaten their own existence. Anyone greater than who they are threatens their power choke hold.

Normalization Gets Israel Peace But What Do Arabs Get?