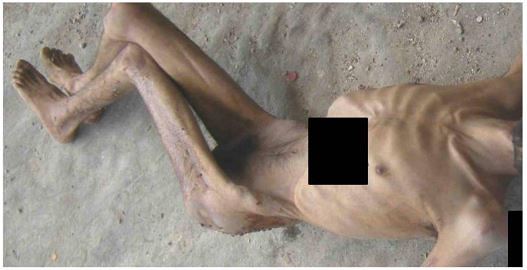 Living with the mental scars of torture

August 19, 2014 8:52 am 0
Don’t Give Assad a Pass on Crimes Against Humanity
Could the Alawite Protests in Latakia Spell the End of Assad?
Obama is Burying Assad’s Recent Chemical Attacks

Editor’s Note: The monstrosity of Assad will leave a deep ethnic scar unto a region more in need of healing and forgiveness. This is the real legacy of Obama and Kerry who engineered a chemical disposal operation but left Assad to finish his human disposal operation intact.?

Three storeys below ground in a concrete block in central Damascus, Omar Jibaii was shoved into the darkness in a 7x4m (23x13ft) room.

It was suffocating, with no window or access to air, the confined space shared by 100 other frightened people – one room in a complex of rooms in Syria’s largest detention centre.

“Every one of us had less than 20cm of space to sit or stand. We were cramped one on top of the other and we slept and spent the day in exactly the same conditions,” Omar, a theatre director, recalled of the three months spent in detention.

But in a way, Omar was lucky. He was not tortured and managed to get released after a relatively short time.

He used to serve in the army and belongs to the Druze minority group. “Others, who are mainly of Sunni background, were tortured on a daily basis,” he said.

Omar kept recalling a painful memory of a 13-year-old boy from the southern city of Deraa.

“They used to hang him from his hands and torture him for eight hours on a daily basis,” Omar said. “I wished he’d die and be relieved from the pain. They used to hit his head against the iron door and I would think he would pass out, but he never did.

“Every day after his round of torture the little boy used to say to his cell-mate: ‘I don’t know what I have done to them for them to do this to me'”, Omar said.

Omar left Syria after his release. He is now living in Beirut and trying to find ways of coping with the trauma of his prison experience.

Putting a play on stage with amateur actors was a way of therapy, but also a message to remind the world of what is happening inside cells in Syria.

The drama, The Double Life of Doctor Valmy, by Spanish playwright Antonio Buero, is performed in a flat used as a cultural centre off a busy road in Beirut.

A couch, two chairs and a table set the scene.

Although the play is about the life of an army officer during the Spanish civil war, the story closely resembles current events in Syria.

In it, the officer suffers sexual impotence as a result of mutilating one of his prisoners. Yet he does not want to admit, either to himself or his wife, that his disability is a reaction to his brutality.

“I always wondered how those who are torturing prisoners feel themselves. How do they go back home to their wives and children?” Omar asks. “‘I can’t talk about what I saw – it is beyond what one can live with.”

Omar is trying to deal with his trauma through theatre. But thousands of others are living with the burden of the experience.

Human rights organisations in Syria have documented the arbitrary detention of tens of thousands of people, including women, children and the elderly. For many, death from bombardments would have been preferable to the conditions inside prison.

“During the early days of the uprising, we used to ask our families to pray for us to die with a bullet and not be detained as we know what awaited us in prison,” said Loutfi, a peaceful activist, who has been detained three times since the start of uprising in 2011.

He left prison with injuries to his back and leg and psychological damage.

“I was referred to a terrorism court, though they had no evidence of anything I had done,” he said.

Loutfi’s identity was enough for him to be detained. His ID card says he is from Idlib and a resident in the Damascus suburb of Douma, though he was actually living in central Damascus.

The 29-year-old works in banking and is an advocate of democracy and secularism.

But his Sunni background was enough of a crime for the regime.

He too left Syria, fearing another detention, and never talks about what happened. He became withdrawn, keeps the company only of his close friends and drinks a lot.

“It is hard to describe it or talk about it,” he said. “The sound of water dripping from a tap is enough to make me nervous as it reminds me of the torture. Better to forget, but I’m not sure I can.”

The Syrian government has issued more than four amnesties during the three years of uprising, but peaceful political activists remain imprisoned.

These are a few names out of hundreds of peaceful civilians in Syrian prisons.

Loutfi and Omar were lucky to be released. Thousands of others – many tortured to death – have not been.

Those who are freed suffer tremendous trauma and need psychiatric help. Many believe that when and if the war ends, the nation will need a long time to heal from the psychological effects not just of the war, but of the prison experience as well.