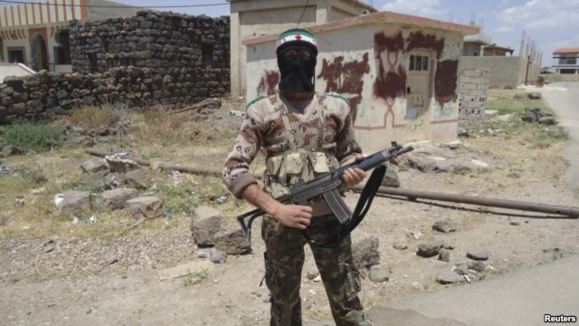 Now That Rebels Are Winning

December 2, 2012 10:13 am 0
War of attrition the minorities cannot possibly win
Syria’s refugees: Fears of abuse grow as Turkish men snap up wives
Too Much Arab Talk When Action to Save Aleppo is Needed

Last month, the Syrian rebels captured (See video below) a 12 sq. km military base in northern Syria that was raining hell upon the people of Aleppo and Idlib through the use of long-range heavy artillery. Base 46 is one of the biggest in Syria and its capture was a decisive victory for Syrians fighting the tyranny of Assad.

Hidden in its bowls was a trove of treasure in the form of Russian made anti-aircraft SA-16 Gimlet missiles, in addition to heavy weapons of all kinds. The shoulder-controlled SA-16, weapon of choice used by Saddam in the Gulf War, is quite effective against Russian made fighter jets in the Assad’s arsenal.

This capture is enabling the FSA to train many defectors in its use (On-going today), and although a helicopter carrying military high officials of the Assad regime and another fighter jet were shot down lately using these missiles (Intercepted based on intelligence), more will be shot in the near future as the trainees become lethally armed and are able to spread themselves in regions where Assad strikes have become a daily routine.

Given those successes, the small country of Qatar is attempting to take credit for the rebels’ success, now that rebels are winning, by claiming it smuggled anti-aircraft missiles to the rebels, which have been responsible for downing the helicopters and the jets.

The Qataris did help smuggle arms to the FSA but mostly those were light arms the Qatari Emir got special permission to smuggle from a desk officer at the US State Department. However, late in the summer, the Saudis and the Qataris smuggled some 20 anti-aircraft SA-7 missiles that were spread too thin to have much effect. I do not know of any aircraft shot down with those missiles.

The capture of these missiles creates a rebels-controlled air defense system or as some rebels has started calling it “our own no-fly zone” in defiance of the Obama administration stubborn position against a no-fly zone to protect Syrian civilians from the Assad terror.

The capture of base 46 and the freeing of many would-be defectors as well as prisoners of war awaiting their turn to be shipped to Damascus to be tortured for information then killed have swelled the ranks of the FSA with able and motivated bodies to counter the effectiveness of the IRGC and Hezbollah fighters helping Assad win his battles.

Furthermore, the heavy artillery captured can now be turned against buildings where IRGC and Hezbollah snipers have lodged themselves to kill with terrorizing accuracy. Saddam may not have been able to win the war against the Iranian regime in the 80’s but in this century Syrians, with a combination of guerrilla and classic military warfare, are going to ship Hezbollah back to its rat holes in Lebanon and IRGC fighters to their mothers in Iran. In body bags that is.

Today’s treasures of SA-16 Gimlet captured missiles will help mount a true no-fly zone once enough trainees are deployed across the land. Syrians no longer need Obama or the Qataris to block them from winning or to brag about their lies.

In fact a helicopter was just downed at the Mazzeh Military Airport near Damascus as this is written on December 2 at 10:35 am Washington DC time.

Now That Rebels Are Winning