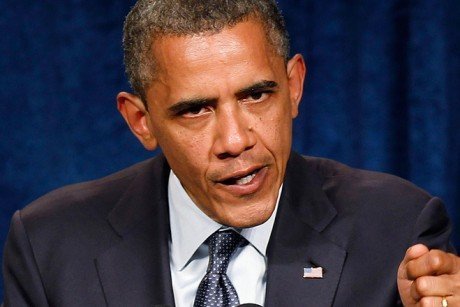 What I just find interesting is the degree to which this issue keeps on coming up, as if this was my decision.

These words, marrying petulance and implausibility, were spoken by President Obama when he was asked, shortly after the beginning of U.S. airstrikes in Iraq, whether he regretted withdrawing all U.S. troops from the country during his first term. That entire analysis is bogus and is wrong, was his startling answer.

That Obama is somehow not responsible for the Iraq pullout would be news to anyone who remembers his announcement of it, when he bragged of fulfilling his promise to end America’s war in Iraq; or his subsequent election campaign, in which he tirelessly proclaimed that the tide of war is receding. The sudden disclaimer certainly raised eyebrows among the numerous senior officials who have said both on and off the record, that Obama resisted leaving behind a stay-on force, slashed its size far below that proposed by military commanders and expressed relief when a legal snag provided him a pretext to pull the plug on Iraq altogether.

What?s most disturbing about Obama’s outburst, however, is what it says about his willingness, with 21/2 years left in his term, to recognize his foreign policy mistakes and endeavor to correct them. Even as he has been forced to reverse his Iraq decision, the president appears stubbornly determined to reject the conclusion that has become conventional wisdom outside the White House: that his retreat in Iraq and passivity in Syria did much to create the ugly monster the United States now faces in the Islamic State, an organization that is more powerful, more vicious and more ambitious than al-Qaeda prior to Sept, 11, 2001.

The critique extends far beyond familiar Republican or neo-conservative precincts. To one degree or another, it has been voiced by former secretary of state Hillary Clinton, by the Democratic chairmen of the Senate Foreign Relations and Armed Services committees, by four former ambassadors to Iraq and by Obama’s own former ambassador to Syria. In short, the din resembles that which George W. Bush faced on Iraq as he neared the midpoint of his second term.

Bush, too, resisted the conclusion that his toppling of Saddam Hussein had been a mistake and the subsequent occupation was disastrously managed. But beginning in the late summer of 2006, he quietly initiated a dramatic change of course. By the end of the year, Donald Rumsfeld had been ousted?from the Pentagon and the surge; a bold offensive to turn around the war was ready to be launched.

Bush’s remedy was not what most of Washington wanted, but it reflected a willingness by a president derided as inflexible to rethink cherished assumptions and long-established policy. Most important, the surge largely succeeded chiefly because it set aside a previous strategy aimed at reducing U.S. risks and burdens in Iraq for one intended to defeat al-Qaeda and other forces tearing the country apart.

Ironically, the approach Obama has now embraced for Iraq has the same logic that failed for Bush. It seeks to minimize the use of U.S. forces while pushing Iraqis to overcome their intractable political problems and field an army capable of defeating the Islamic State. The problem for Obama, as it was for Bush, is that neither part of the plan is particularly realistic. While they might eventually be strong-armed into forming some semblance of a government, Iraqis won’t overcome their bitter sectarian divide among Shiites, Sunnis and Kurds, which is part of a larger regional struggle. Meanwhile, the shattered Iraqi army won’t be able to move on the heavily armed and highly motivated extremist forces anytime soon.

Like the failed U.S. commanders who preceded Gen. David Petraeus, Obama argues that there’s no American military solution in Iraq. But Bush’s surge disproved that thesis. Al-Qaeda was decisively defeated, providing Iraq several years of relative stability. The resurgence of the extremist forces is less the result of Iraqi political dysfunction than the civil war in Syria, where the West’s failure to back moderate forces allowed the concentration of militants that birthed the Islamic State.

This is not to argue that Obama should dispatch hundreds of thousands of U.S. ground troops to the region. The point is that a doctrine whose first priority is avoiding U.S. engagement is bound to fail. The goal must be offensive: to defeat those forces that are destroying Iraq and Syria, from the Islamic State to the homicidal regime of Bashar al- Assad. That can be accomplished only with U.S. military and political leadership. And it will require Obama to accept the conclusion he still bitterly resists: that he was wrong.