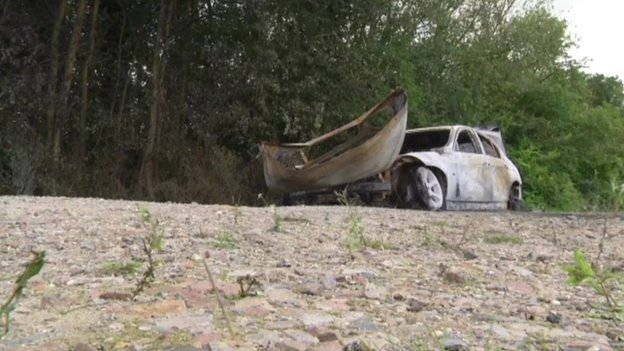 The convoy was heading through northern Paris on its way to Le Bourget airport late on Sunday evening when it was raided, reports say.

The gunmen seized a vehicle carrying the money and documents, later releasing the driver and two others.

The convoy was said to have come from the Saudi embassy. No-one was hurt.

The gunmen, reportedly armed with Kalashnikov rifles, targeted a Mercedes mini-van at 21:15 (19:15 GMT) on the northern ring road, or peripherique, at Porte de la Chapelle, on the edge of Paris.

The motorcade, belonging to a Saudi prince, was ambushed by eight people in two separate vehicles who pointed their guns at the driver of the Mercedes, forcing him to stop, French media reported.

The men then drove the vehicle away with the driver and the two other Saudis inside. No shots were fired but the Saudis were later freed.

“In the vehicle there was roughly 250,000 euros in cash and official documents from the embassy,” police union spokesman Rocco Contento told BFM TV news.

According to Contento, the operation lasted just a few seconds, something that pointed to “a very organised and especially informed commando unit, who had information and accomplices”.

“As far as I am concerned, it looks very much like it could be commandos from eastern Europe, who we know about, who are often paid to do dirty work.”

The Mercedes was heading to Le Bourget airport with paperwork for the departing prince, who has not been named, according to the prosecutor’s office. Le Bourget is often used for high-level visitors taking private jets to Paris.

The vehicle was eventually found abandoned and another of the gang’s cars was found burned out.