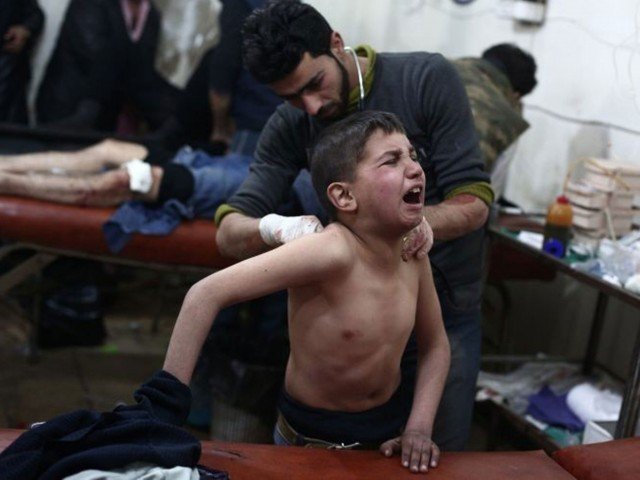 Recent rebel victories on the battlefields – Islamist and non-Islamist – fighting the Assad regime have been impressive. In the Idlib province, the rebels captured Jisr al-Shugur, a key strategic town overlooking the Sahel, the minority-held region stretching to the coast. In the south, the rebels made significant gains against fatigued Assad forces and captured a military base.

“What you have now is what appears to be the Syrian government’s inability to control — not just [Idlib] — but to hold territory and to defend and fight back, you’re seeing a real gap in capability.”

That lack of capability extends to Damascus too.

All in all, April 2015, 49 months into the Syrian Uprising that turned into a civil war, has been good for the anti-Assad fighters. They have been united by Saudi Arabia, Qatar, and Turkey with the aim of defeating the mass murderer Assad.

Nonetheless, Assad continues using his Air Force to gas civilians across Syria. It is high time the rebels stop Assad atrocities, attack Damascus instead of threatening the civilian minorities on the coast. Concentrating on Damascus may not be a low-hanging fruit because Assad defends the city well, but to go after the Alawites and the Christians living on the coast defeats the purpose of this war.

By attacking Damascus, instead of the civilian minorities, the rebels would pave the way for reconciliation after the Assad defeat. Surely, the Saudi leadership must know this. Without reconciliation, the war will not end, which will permit Iran to perpetuate its interference in Syria. Therefore, stop Assad atrocities, attack Damascus today.

Damascus is well protected by Assad. Damascus is also the scene of the Sarin gas attacks of August 2013, which makes the majority of its silent population fearful and inactive. An attack on Assad’s seat of power in Damascus would activate tens of thousands of new recruits willing to finish the regime off with knives and batons. It would also accelerate defections from Assad’s army to leave him and his murderous thugs hanging for dear life.

Saudi Arabia, Qatar, and Turkey must see the war in Syria from the prism of all Syrians, and not just from those who suffered at the hands of the Assad regime or the majority-Sunnis who withstood over 45 years of the Assad tyranny and savagery. The minorities, even though they supported Assad, did so for fear of the unknown. Many of them did not know what Assad was perpetrating against his own people the way many Germans did not know about Auschwitz and Dachau.