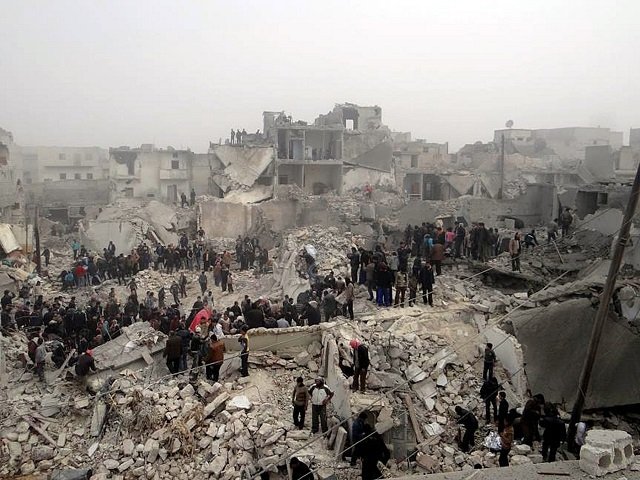 US, Russia, Saudi Arabia to Meet Over Regional Battle Zones

AP reported that US, Russia, and Saudi Arabia were to meet in Qatar to discuss regional battle zones in Syria, Yemen, and Libya.

Kerry earlier has said he plans to meet separately in Doha with Lavrov to discuss Syria, Iran, and the ongoing crisis in Ukraine.

The ministry said that during his visit to Qatar, Lavrov will discuss the regional battle zones in Syria, Libya and Yemen, international efforts to combat the Islamic State group and Iran’s role in regional affairs after last month’s signing of Iran’s nuclear deal.

This meeting to discuss regional battle zones may hold some promise on one front, but in light of Barack Obama’s unleashing of Iranian terror in the region with his Iran deal, this meeting will only fuel the resentment Sunni Arab countries feel towards the Obama administration.

There is unity among all parties that extreme Islam in Syria must be defeated. Saudi Arabia and Qatar believe this should include the Assad regime, the premier promoter of terror and violence, which forged the ISIS terror machine in the first place. Secretary Kerry and Foreign Minister Lavrov will more likely disagree. They will both argue that Assad is needed to defeat the very same Islamic terror he forged.

Syrians will never quit the war no matter if any Arab country attempts to influence them. If Assad is not deposed, ISIS will only get stronger if countries like Saudi Arabia abandon the Syrian rebels. ISIS can survive on private Sunni donations if need be. Because Obama struck ISIS but not Assad, most Arab Sunnis believe that America and Russia have banded together to kill as many Sunnis while letting Iranian terror off the hook.

This line of thought is feeding the ISIS terror machine.

The unity over defeating fanatical Muslims will not be enough to force the survival of Assad on the Arab street. Syrians will keep fighting alone if need be until Assad is deposed and tried for his crimes against humanity.

US, Russia, Saudi Arabia to Meet Over Regional Battle Zones