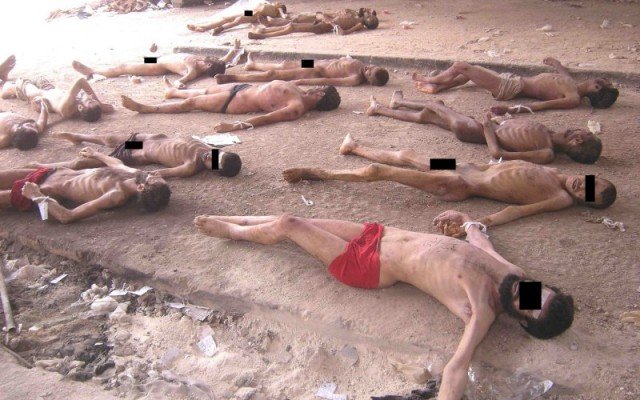 In the Middle East, every street corner could be a movie set where real mass murders and barbaric executions take place routinely. Who would fault the Israelis for their security-minded, super sensitive culture?

An Arab mass murderer gasses women and children in Gouta in August of 2013, followed by Muslim ISIS/ISIL terrorists massacring helpless, surrendering Iraqi forces in June of 2014. Between both, our lost generation of Arab and Muslim children have their entertainment and role models rolled into one.

Welcome to the upcoming generation of Arab and Muslim Bestialnnials.

In 2011, during a conference on the Middle East in Vienna, Austria, an older, well-groomed Austrian man approached me to ask, ?What are you doing with them?? The ?with them? being Jonathan Spyer who was speaking on the same panel, and Simone Dinah Hartmann, spokesperson for ?Stop the Bomb?, a courageous organization that sponsored the event. Both are Jewish.

For a moment, consider the two parallels between the anti-Semitism of a defunct ideology to the terror of extremism we see before us in the gruesome killings Arab and Muslim men practice with abandon and total impunity; then ask yourself, ?How long will it take for this region to reform?? If some Europeans still yearn for their violent anti-Semitism, after almost 80 years of exposure to the atrocities of Nazism, who in their own right mind would believe the Arab and the Muslim role models before us would entice reform in our lost children when we watch them from the sideline?

All those advocating for the International Criminal Court for Assad or Guantanamo for the Muslim terrorists, rejoice in the knowledge, it is the guillotine or western civilization will perish. Only total eradication of the likes of Assad and the Islamist extremists may bring about some order. This type of role model has to be expunged to send a clear message to our children as soon as we possibly can. Let us ease our children from a 1,000-year expectation for reform to an 80-year of hopeful change.

The US should have never let Omar al-Bashir walk scot-free. That action sets the bar other Arab men see as their ceiling, and Assad is setting the bar for future men of violence. If we cannot defeat Islamic extremism so easily, let us at least defeat men who may spark it.

Unlike Darfur where it was a one-dimensional genocide, Syria is not. If it was not for the Alawite regime gassing Sunni women and children, we might not be in this predicament of watching Sunni terrorists slaughter helpless and innocent Iraqi Shias. Have we forgotten the violence of Saddam Hussein, Omar al-Bashir, and Osama bin Laden already?

For some, the connection is not that obvious. I have yet to read any argument of what the Assad terror has unleashed upon the innocent in Syria and Iraq. It really does not take much for Sunnis to recoil and explode with violence. Our history is full of many examples.

We all know Assad is ill equipped to rationalize otherwise he would not have unleashed a Sarin gas attack against Sunnis, but the moment Mr. Obama refused to stop him, the volcano of Sunni violence erupted. Nouri al-Maliki expanded it into Iraq. Attempting to stop that volcano, as L. Paul Bremer suggested in the Wall Street Journal, is like stepping into the molten lava with a fire hose.

The worst part is that every good analyst of ME politics predicted more violence because of what Assad has done. These experts are what a nose is to a perfumer.

Assad lit the fire in Syria, and Iraq is about to burn as a result with Jordan and Lebanon suffocating from the fumes. We have to tip our hat to Assad; he did threaten the West he was going to burn the region, and true to his word it is burning.

Any other US President would have acted more decisively against these threats instead of removing US troops from Iraq because of a promise he made to the American people; even though Mr. Obama fully grasps the consequences of fulfilling promises made by candidates as opposed to Presidents.

H?las, Obama is anything but any other US President.