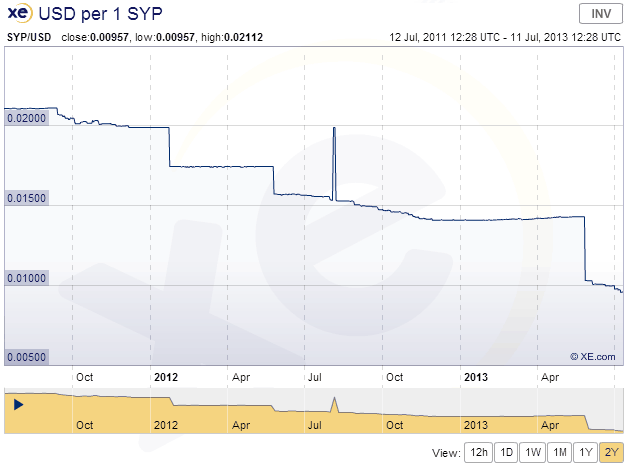 The Obama Administration policy on Syria can be summarized with this sentence: Cheap words for precious Syrian lives.

The day the Syrian Revolution against the Assad regime began, on March 15, 2011, the Syrian Lira traded at about 54 for every $1. Today, it has tumbled to almost 102 Syrian Lira for each $1.

To shore up a currency Assad needs to start paying with to acquire Russian weapons, now that his foreign reserves are all but exhausted, the regime just passed a law to criminalize severely all black market activities.

If caught trading en noir, you could serve from three to 10 years in prison. The law is impossible to enforce given Assad lacks control over the majority of the country and given that before him many have tried to curb illegal trade activities, we sometimes refer to as smuggling, without any success.

In addition to this new law, the Assad regime has started buying its own currency as part of the campaign to strengthen the Lira. SANA, the official mouthpiece of the Assad regime, announced that Central Bank Governor Adib Mayyaleh sold $50m to the exchange companies, a pittance which is indicative of the low foreign currency reserves the Central Bank keeps on its books, at such a pivotal time, considering Syria, at one point, could boast over $16 Billion worth of foreign currency reserves.

If one timid US Government announcement delivered by Ben Rhodes, the Deputy to the National Security Adviser, to the effect the US would arm lightly the rebels directly, had such an effect on the currency, one could imagine the hard time Assad could be facing if a stronger announcement was made by the President. Cheap words for precious Syrian lives.

The US does not need to dispatch boots on the ground in Syria, nor does it need to risk a no-fly zone; the US can defeat Assad with words. The right words at the right time will have an impact on the Syrian currency Assad needs desperately to remain in firm control.

Words, not US money, weapons, or assistance, to save precious Syrian lives. It cannot get any cheaper. Talking about the idiot guide to breaking Assad’s back!

Mr. Obama knows the effect this will have on the Assad regime; yet, judging by his silence on Syria, the President is unwilling to say the words that would lead to saving Syrian lives.

His policies are a gift indeed to the terror of Assad, Iran, and Hezbollah as well as the Muslim Brotherhood. Do you think he realizes it?