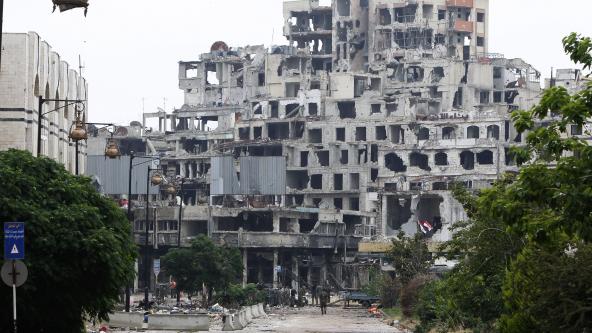 January 24, 2015 1:01 pm 0
The Life Civilian Alawites Need To Embrace
On Syria Biden Got Away With Murder
The Nine Dangers Facing Syria

In 2011, the U.S. ambassador to Syria, a mild-mannered diplomat named Robert S. Ford, became the face of American support for the Arab Spring when he boldly visited opponents to the brutal regime of Bashar Assad in the northern city of Hama.

In 2014, Ford quit, saying he could not defend the Obama administration’s inconstant support for Syrian rebels. “More hesitation … [will] simply hasten the day when American forces have to intervene against Al Qaeda in Syria,” he warned.

Now, a year later, Ford’s warning has come true. U.S. warplanes bomb jihadists in Syria week after week. Northern Syria has become a base for both Islamic State, which invaded Iraq last year, and an Al Qaeda franchise that trains European terrorists.

But Ford thinks U.S. policy has moved backward, not forward. “We’re seeing Syria divide into four countries,” he told me last week. “and I’m not sure it can be put back together.”

It’s the most conspicuous failure of U.S. foreign policy today. The Assad regime that President Obama declared dead remains in power, and roughly half its territory is held by jihadists. The moderates the U.S. said it would support are mostly scattered and defeated.

You wouldn’t have learned that from Obama’s State of the Union speech last week, though. In Obama’s telling, Syria is part of a success story.

“In Iraq and Syria, American leadership, including our military power, is stopping [Islamic State’s] advance,” Obama said. “Instead of getting dragged into another ground war in the Middle East, we are leading a broad coalition … [and] supporting a moderate opposition in Syria that can help us in this effort.”

It’s “a smarter kind of American leadership,” the president said.

Actually, two American impulses have collided in Syria. One was the desire to help topple a regime that has held power through “murder, hostage-taking, enforced disappearances, torture, rape, sexual violence, use of child soldiers, targeting civilians, and indiscriminate bombing,” to quote the State Department.

The other, stronger impulse was to avoid getting entangled in another war — and that, officials said, has been the most consistent message from Obama and his closest aides.

So even as the administration announced program after program to aid moderate rebels — from humanitarian aid and “non-lethal supplies” to a not-yet-started plan to train 5,400 rebels a year — the warning that filtered through the bureaucracy was: It’s safer to move slowly than it is to take risks.

“There’s never been a great sense of urgency in the administration about doing something big,” Ford said. The new training program, he added, is so small that it “has the feel of checking a box.”

Meanwhile, the jihadists didn’t wait. They collected government aid and private donations from the Arab Gulf states; they bought weapons and trained rebels; and, in November, they overran bases of Harakat Hazm, an armed group the United States was backing, and seized its U.S.-supplied anti-tank missiles. “At that point, our window [for arming rebels] closed,” Ford said.

There isn’t much appetite in Congress for shipping anti-tank missiles to rebels if the missiles end up in the hands of Al Qaeda affiliates. But that still leaves the United States fighting a war in Syria if it is to “destroy” Islamic State, as Obama has promised.

That goal, if it’s real, will require a ground force. U.S. officials have nominated Turkey, or a coalition of Turkey and friendly Arab forces, plus the future Syrian rebels if their U.S. training ever starts. But that’s a force that doesn’t exist in service of a strategy that hasn’t been described.

One thing U.S. officials still insist they won’t do is conclude an alliance with Syria’s Assad. But they’re no longer insisting he needs to step down immediately. They’ve suggested that the United States could be flexible if Assad’s regime entered serious peace talks with the non-jihadist opposition.

“It is time for President Assad [and] the Assad regime to put their people first and to think about the consequences of their actions, which are attracting more and more terrorists to Syria,” Secretary of State John F. Kerry said Jan. 14.

If the administration has a diplomatic strategy, it centers on cajoling countries that have influence in Syria — Russia, Iran, Saudi Arabia and Turkey — to join in a combined effort to end the conflict. The premise is that those countries fear Islamic State and other jihadists enough to put aside their otherwise deep divisions. But that’s a long way from happening too.

Until then, the U.S. strategy boils down to attacking Islamic State from the air, hoping a war of attrition somehow weakens Assad’s grip on power, and asking Turkey (and perhaps others) to act on the ground where the United States has been unwilling.

And that offers little ground for optimism. The lesson of our misadventure in Syria may be this: A risk-averse foreign policy can keep you out of ground wars — but it can also keep other goals out of reach too.