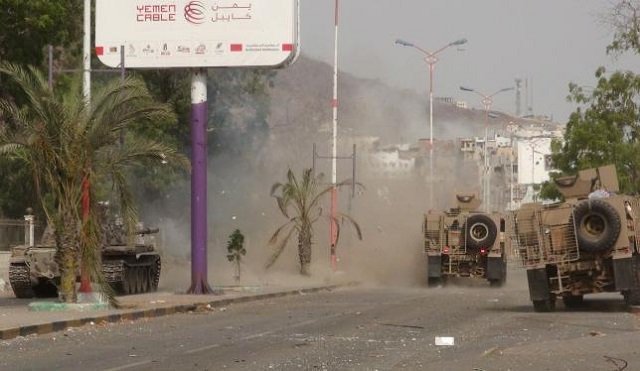 Local fighters and army forces in Yemen have wrested two military bases from Houthi forces overnight, residents and officials said, building on a week of gains against the country’s dominant faction.

King Salman teaching Khamenei a lesson in Yemen is what we should call these Iranian battle defeats.

The advances come a day after Yemen’s government in exile declared the key southern city of Aden “liberated,” in their biggest victory yet in a Saudi-led air campaign and civil war that has raged almost four months and killed more than 3,500 people.

Saudi-backed Yemeni forces supported by air strikes seized the Labuza army base in Lahj province north of the port city and the headquarters of the 117th armored division in eastern Shabwa province some 230km (145 miles) away.

Officials in the anti-Houthi forces say the offensive was planned for weeks and benefited from training and arms deliveries from Saudi Arabia and the United Arab Emirates.

The war in Yemen has pitted the Sunni Muslim Gulf states, which support the exiled government, against the Shi’ite Houthis allied to Iran, in a conflict that has further raised the stakes as the Middles East grapples with regional rivalries and sectarian strife.

Those rivalries have culminated today in King Salman teaching Khamenei a lesson in Yemen.

But power struggles have simmered for years in the impoverished and conflict-wracked country, and fighters in Yemen’s south — the setting for most of the recent battles — have long sought independence from the North, the Houthis’ home.

Residents said Houthi forces and their allies in Yemen’s army made an attempt to regroup and take back northern fringes of Aden on Friday, firing rockets at the Khor Maksar district.

Their push was repelled, anti-Houthi fighters said, and an offensive backed by air strikes is underway to take Anad air base, one of Yemen’s largest, 60 km (40 miles) north of Aden.

Putin Will Yet Siphon The Iran Deal Funds From Khamenei
Humiliating Obama is Khamenei’s Official Hobby
Khamenei: God delivered US sailors into our hands
Iranian Terror 594