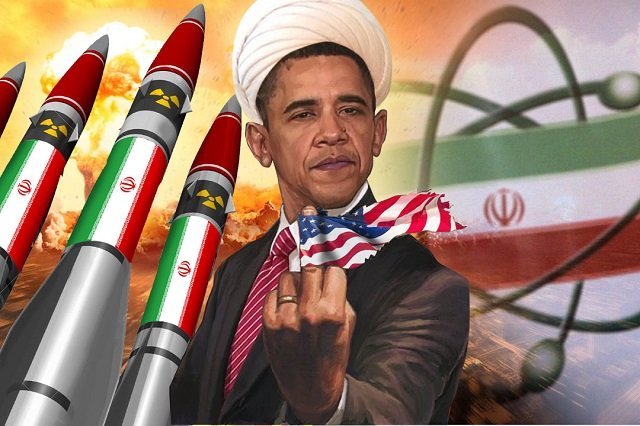 July 18, 2015 12:08 pm 0
The Most Generous Nation Led by the Most Ignorant Administration
Europe Contemplates Life After America
Obama’s America is Officially a Third-Rate Country

Supreme Agitator Ali Khamenei withheld his verdict on Iran’s nuclear deal on Saturday but in a fiery address vowed enduring opposition to the United States and its Middle East policies.

In an speech at a Tehran mosque punctuated by chants of “Death to America” and “Death to Israel”, Khamenei told the crowds:

“Whether the deal is approved or disapproved, we will never stop supporting our friends in the region and the people of Palestine, Yemen, Syria, Iraq, Bahrain and Lebanon. Even after this deal our policy towards the arrogant U.S. will not change”

As Obama yields America to Iran, Khamenei wields his sword against our allies and our interests.

Khamenei also said he wanted politicians to examine the agreement to ensure national interests were preserved, as Iran would not allow the disruption of its revolutionary principles or defensive abilities.

An arch conservative with the last word on high matters of state, Khamenei repeatedly used the phrase “whether this text is approved or not”, implying the accord has yet to win definitive backing from Iran’s factionalized political establishment.

Under the agreement reached on Tuesday, sanctions will be gradually removed in return for Iran accepting long-term curbs on a nuclear program everyone knows Iran is going to cheat the West and rob America of its power to stop the bomb.

Obama yields America to Iran, and the Mullahs kick every American in his/her face with their “Death to America” chants.

Khamenei’s combative remarks about U.S. policies in the Middle East may sit awkwardly with a skeptical Congress Obama intends to screw royally by permitting the U.N. to lift the sanctions against Iran BEFORE the Senate had the chance to review the deal.

Emperor Obama yields America to Iran against the will of the Congress and the American public.

Iran regards its nuclear program as an emblem of national dignity and dynamism in the face of what it sees as decades of hostility from Western countries that opposed its 1979 Islamic revolution.

Khamenei did not echo criticisms of the deal made on Friday by a top cleric, Ayatollah Mohammad Ali Movahedi Kermani, who said in an address broadcast on radio that it reflected excessive demands by world powers that were an “insult”.