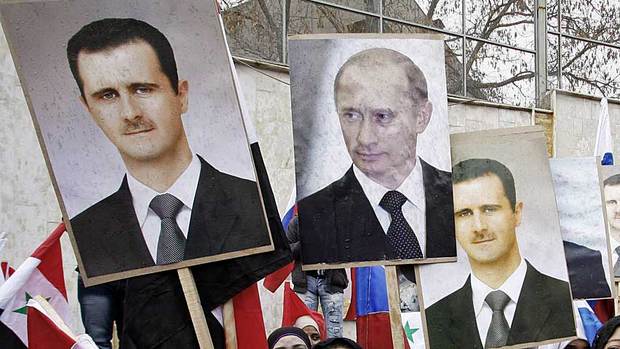 June 20, 2015 8:30 am 0
America is Governed by Masochistic Men Who Lost Their Cojones
Yes, America, it’s war. Here’s how we can stop losing and start winning
Vladimir Obama and Barack Putin

One of the astute observations ex-Israeli Ambassador to the U.S. Michael Oren makes in his upcoming book “Ally: My Journey Across the Israeli-American Divide” is reflecting upon Obama’s own book “Dreams From My Father” in which Obama, not once, lauds the United States of America, its greatness, or its achievements.

In the his book, Oren writes:

More alarming for me still were Obama’s attitudes towards America. Vainly, I scoured Dreams from My Father for some expression of reverence, even respect, for the country its author would someday lead. Instead, the book criticizes Americans for their capitalism and consumer culture, for despoiling their environment and maintaining antiquated power structures. Traveling abroad, they exhibited “ignorance and arrogance”–the very shortcomings the president’s critics assigned to him.

As the Ambassador said: Obama does have a problem with America. He does not believe in the country he pretends to lead.

So, when Putin reaffirmed his support for Assad of Syria in spite of all the death and destruction the Assad family has chaperoned upon the Syrian people and the region in general, Putin mocking America was his first aim; his second was telling the Muslim fanatics to kill more Christians and more Alawites.

Obama seems to agree with him through his silence, his lack of conviction of America’s role in its quest for freedom for all, and by ignoring the atrocities of Assad.

Putin is backing Assad, which will only increase terror and extremism. Putin mocking America through his support for Assad.

Between Putin supporting the terror of Assad and Obama ignoring his terror, are we surprised that the outcome is more terror, more ISIS, more sympathizers for ISIS in the Arab street, and more blank faces on Obama’s national security team unable to fathom what is happening. The Einstein Ben Rhodes should begin writing his memoirs to blame ISIS on George Bush.

Meanwhile, Putin mocking America, which indirectly mocks Obama, does not seem to register with Obama’s people. Putin even attempted to ‘assign blame’ for the chlorine gas attacks on ISIS instead of Assad in cooperation with the US. How is that for Putin mocking America? Ambassador Power must have told Lavrov to go fly a kite.

For those concerned about the future of Syria, what will happen if Assad falls will be the responsibility of a responsible country like Saudi Arabia.

When the Saudis backed Rafik Hariri in Lebanon after a 17-year civil war, did Hariri persecute the Christians or the Druze? Did he kill and torture people? Putin hates Sunni Muslims so much, he would rather see Assad destroy the country than a moderate Sunni like Hariri chart the destiny of Syria.

With his unwavering support for Assad, let the Muslim extremists kill more Alawites and more Christians is Putin’s message to the minorities of Syria.

Putin could care less about Arab Christians. He protects Assad to protect Russian interests only.