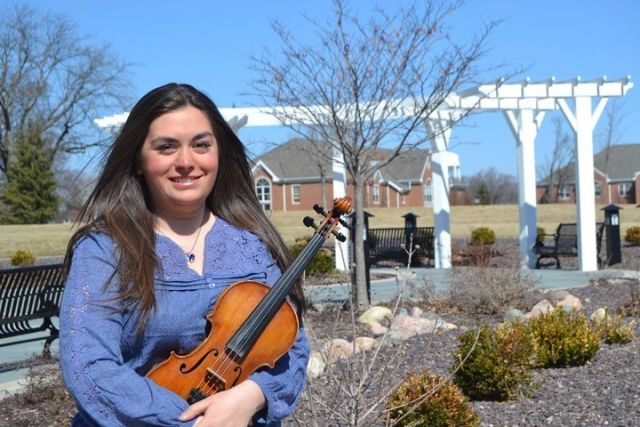 She Fled Syria And Found Refuge On The Stage

Source: BuzzFeed – by Hayes Brown (She Fled Syria And Found Refuge On The Stage)

WASHINGTON — Mariela Shaker is singular. A virtuoso, as some have called her. When she takes the stage at the John F. Kennedy Center for the Performing Arts in Washington, D.C., on Saturday, all eyes will be on her.

She is also one of nearly four million. That’s how many of her fellow Syrians have, like her, fled the chaos and warfare that has engulfed the country over the last five years. Her home city of Aleppo is largely in ruins. Her family, she left behind. But still she plays on.

Inside a darkened café in the lower level of her Washington hotel, Shaker, 24, sits turned slightly inward. She isn’t reluctant to talk about her childhood in Aleppo and the time spent learning the instrument that would eventually be her way out of Syria.

She was 9 when she first enrolled in the Arabic Institution of Music in 1999. But playing the violin wasn’t preordained — her actual first love was the piano. “My mother chose it for me,” Shaker said with a small laugh, of the instrument she’d eventually master. It took a year of cajoling from her mother and teachers to appeal to her and convince her that the violin — a much less expensive item to purchase for a novice — was the most difficult instrument and one she’d excel at.

After graduating from the Institution in 2004, she said, she studied with Russian professors and began to teach at the same institute she graduated from. For five years she instructed a younger generation of musicians on the violin, while studying business at Aleppo University.

For awhile, she was also traveling around Syria in solo performances. A member of the Syriac Orthodox Church herself, her favorite performance during that time was under the auspices of Bishop Yohanna Ibrahim. (Ibrahim has been missing since 2013, kidnapped while returning from a humanitarian mission in Turkey.)

“It means so much to me, this recital, because my mom was always the first supporter — I can’t forget this performance,” she said quietly.

Then the civil war began.

The clash borne out of protests demanding  [psychopath] Bashar al-Assad to embrace democratic reforms affected every part of her life, including her studies at Aleppo University (and has spiraled to consume the entire region). Shaker finally obtained her bachelor’s degree in 2013, but she couldn’t celebrate. Her final class was delayed three times, pushing back her graduation by seven months. The setback cost her a scholarship to study at the Trinity Laban Conservatory in London.

Shaker’s ticket out of Syria came in the form of a full scholarship to Monmouth College, a tiny liberal arts school in Illinois, where she decided to get her second bachelor’s in music performance.

It was Carolyn Suda, director of string activities at Monmouth College and founder of the Monmouth String Ensemble, that helped Shaker get her visa to the United States. And it was in Suda that Shaker found the support she would rely on for the next two years. “She’s not just my professor, she’s my mom,” Shaker said.

“The day I arrived to Monmouth, she saw me walking the street,” Shaker recalled. “She saw me carrying a musical instrument and she knew me right away — because of my accent, I guess.” Suda and her husband stood by her every step during her two years, she said.

She pauses as tears start to fall when talking about Suda, who won’t be able to see her perform on the Kennedy Center’s Millennium Stage on Saturday. “She got me to the train, and I knew that I’m not going to go back to Monmouth,” Shaker said. Shaker will be moving to Chicago, where she’ll be studying for a master’s degree in music at DePaul University.

Meanwhile, Shaker’s parents and her only brother, 27, are still living in downtown Aleppo in the house they’ve been living in for 30 years. She speaks with them almost daily on a shaky phone connection — they don’t have power or internet. But traveling back to Syria has proved impossible. “Once I came here, I figured out it was very hard to go back, it’s very dangerous, very risky,” she said. “And I got this amazing opportunity to be here and finish my education — I can’t risk it.”

Soon after her arrival at Monmouth, Shaker realized that the dangers of going back to Syria meant she needed to apply for asylum in the United States. “Here is going to be my second home, if not the first,” she said.

Shaker found a lawyer in California and began the process. She soon became one of the only 1,000 Syrian refugees that the United States has taken in since the beginning of the war and among the even fewer ones to obtain political asylum.

According to the most recent figures, nearly 4 million Syrians have left the country since 2011 — mostly taking refuge in neighboring Lebanon, Turkey, and Jordan. The rise of ISIS has disrupted the food and medical aid that more than 13 million Syrians still in the country rely on for survival and made the borderlands with Iraq all the more dangerous. Shaker’s parents never considered leaving their home, she said. “They will be patient.”

When she takes the stage on Saturday, as part of the United Nations High Commissioner for Refugees’ World Refugee Day performance, Shaker plans to play a piece that she used for her audition for graduate schools: the first movement of Mendelssohn’s Violin Concerto in E Minor. If she gets the chance to perform an encore, she wants to use the song she performed in the video that won her scholarship to Monmouth:

As for her plans after she obtains her master’s degree, Shaker says she wants to keep studying and performing, taking her skills to an even higher level. “I would love to be a peace ambassador, traveling worldwide, and help in promoting music,” she said. “It is an international language, a language of peace.”

Shaker doesn’t seem nervous about her upcoming performance. If anything, she’s excited that the Kennedy Center is bringing in a friend from her childhood, who has been living in London for the last 10 years, to accompany her on piano. She wants the audience to leave with hope in their hearts.

She Fled Syria And Found Refuge On The Stage

How Islamism Grows in Syria
What Did We Learn From Syria?
The Uncontrollable State of Barack Obama
Things That Matter 382