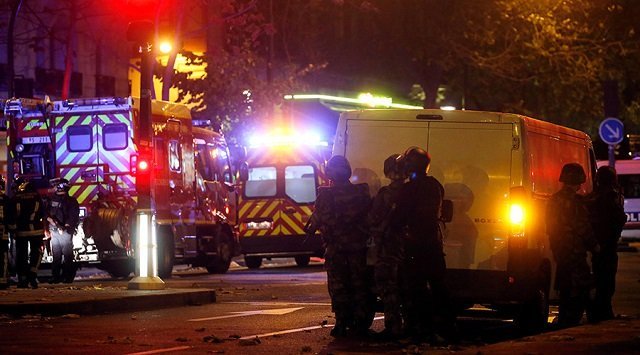 November 24, 2015 8:40 am 0
Obama’s Strategic Patience is Code for F*** America
When Will America Realize Obama is Unfit to Lead?
America’s Year of Living Dangerously

Can it happen here? Yes.

The toll of Islamist carnage keeps growing: 130 killed and 352 injured in Paris; 229 mostly Russian airline passengers killed in the skies over Egypt’s Sinai Peninsula; 19 dead in Bamako, Mali, at the Radisson Blu, a hotel favored by Westerners. Germany has confirmed that plots to kill hundreds more were disrupted in the nick of time. France has extended its state of emergency for three months. Over the weekend, Brussels was virtually locked down as police hunted for suspects linked to the Paris attacks, who may be preparing another operation in Belgium, home of the European Union. Such assaults throughout the Middle East, Africa, and now Europe prompt an all-too-familiar question: Can militant Islamist terrorists strike the United States again?

Before French president François Hollande had even addressed his traumatized nation, President Obama was downplaying the terror threat. At a conference in Asia, he characterized what he called the “sickening” assault in Paris as a “setback.” His strategy for containing ISIS was working, he insisted. Echoing the theme, FBI director James B. Comey said that he knew of no “credible threat of a Paris type attack here.” In New York, NYPD commissioner William Bratton stressed that there was no reason to be afraid, dismissing a new ISIS video warning that New York was its next target as old footage and, hence, old news. Still, Bratton urged New Yorkers to be “vigilant” and embrace his department’s counterterrorism credo, “If you see something, say something.”

“No problem here, move right along,” counterterrorism experts have counseled. The current widespread anxiety, they suggest, is “unwarranted.” New York City isn’t Paris and the U.S. isn’t France, two former Obama administration security officials asserted in an op-ed in the New York Times. America has far fewer angry, unemployed, unassimilated young Muslim men than Europe does—and, therefore, far fewer prime targets for ISIS recruitment, they wrote. The number of American Muslims who have gone to fight in Iraq and Syria is in the hundreds; the number of European Muslims who have done so is in the thousands. Whereas 218,000 refugees fleeing Middle Eastern war and chaos entered Europe just last month—with as many as 1 million expected in the coming years—the U.S. admits on average only 70,000 a year. Unlike the Middle East and Europe, Washington has made it harder since 9/11 for refugees to find shelter here. Finally, they noted, accurately, America vastly outspends Europe on intelligence and homeland security—$650 billion since 9/11 versus France’s annual $47 billion.

But others involved in efforts to prevent another 9/11 warn that despite the country’s enormous security investments and impressive record of having thwarted at least 16 attacks—12 in New York City—America remains vulnerable. ISIS terror has become increasingly sophisticated and “transnational,” argues Otso Iho, an analyst with the London-based Protection Group International’s intelligence division. The Paris attacks were planned in Syria, organized in Belgium, and carried out in France. Several of the plotters were known to French, Belgian, and Turkish security services. The terrorists built explosive devices most likely in Europe and acquired assault weapons, probably somewhere in Europe. They killed victims “calmly and systematically, exhibiting skills likely learned and strengthened during combat operations in Syria,” Iho writes.

Raymond Kelly, the former New York police commissioner whose local counterterrorism program is considered the gold standard of such efforts, argues that ISIS’s Paris attack was not that sophisticated or particularly well executed. The two suicide bombers at the soccer stadium killed mainly themselves, with little collateral damage. Most victims were killed by gunfire from automatic weapons in cafés and the Bataclan concert hall. “But could ISIS do that, even in New York, provided they were able to recruit people willing to die with those they kill?” Kelly asked. “Yes they could.” As a result, protecting New York from this latest evolution in terror has become more challenging. “When you’re up against an enemy who is willing to give up his life to take yours,” Kelly said in an interview, “it’s tough.”

Mitchell D. Silber, a former director of intelligence analysis for the NYPD whose groundbreaking 2007 report warned of the growing threat posed by “home-grown” militant Islamic terrorists, said in an interview and in a Wall Street Journal op-ed that, while the U.S. has fewer disaffected Muslims prone to ISIS’s “toxic ideology,” a significant threat persists because “the number is not zero.” Indeed, FBI director Comey testified that the FBI now has over 900 active investigations—at least one in every state—of individuals possibly linked to ISIS.

According to terrorism experts Sebastian and Katherine Gorka, 74 adults and eight minors were arrested in the U.S. during a recent 20-month period for suspected links to ISIS—a 300 percent jump over earlier detentions. If anything, they argue, such a sudden increase suggests that the possibility of a Paris-style attack in America has “dramatically increased.” Another worrisome factor is Americans’ easy access to automatic weapons. Unlike European parliaments, the U.S. Congress has declined to restrict the right to bear arms even to those on the federal government’s terrorist watch list. Between 2004 and 2014, according to the Government Accountability Office, only 190 of the 2,233 terrorist suspects on the terror list who sought to buy weapons were denied permission to do so. And though they were barred from flying, the 190 applicants were rejected not because they might be terrorists, but because of felony convictions unrelated to national security. “Membership in a terrorist organization does not prohibit a person from possessing firearms or explosives under current federal law,” the GAO study concludes. Interviewed on NBC’s Meet the Press, Bratton said that he was “more worried” about people on the terrorist watchlist buying guns—even in New York, where weapons purchases are more heavily restricted—”than I am about Syrian refugees.”

Silber warns that terrorists would have little trouble purchasing hydrogen peroxide, the active ingredient for the TATP explosives that the Paris gang used in its suicide vests. Just as the convicted al-Qaida operativeNajibullah Zazi was able to do in Colorado in 2009, ISIS recruits could legally purchase small quantities of the potentially lethal chemical at several locations over time without much risk of detection. Zazi’s plot to stage three suicide attacks in New York’s subway was foiled due to intelligence tips from varied sources, including the NYPD’s own intelligence unit, whose information was key in helping thwart 16 planned attacks against the city.

French intelligence has been on high alert since January’s Charlie Hebdo attack yet had no specific intelligence warning that another gruesome assault on Paris was being planned. Washington, too, was apparently clueless. “This was a tremendous intelligence failure,” said Pat Brosnan, a former NYPD detective. At least eight terrorists at seven locations killed 130 people in 33 minutes “without a whisper” of actionable intelligence, he said. Either the terrorists planned the attack in isolation or they communicated with ISIS leaders in Syria using encrypted communications that Western security services couldn’t detect and decipher. Both hypotheses are scary. Brosnan told Fox News that ISIS “learns from its errors and evolves.” There is no more chatting and recruiting on open Internet sites, no more reliance on cell phone communications that can be traced and tracked.

The competition between ISIS and al-Qaida is also likely to intensify danger to American targets. While ISIS has now claimed credit for the several recent attacks outside its traditional area of operations in Iraq and Syria, al-Qaida remains a force in the militant Islamic world, eager to demonstrate its reach and capabilities.

So what does the Paris attack teach us tactically about protecting New York and other American cities? Retired U.S. Army Special Forces officer Michael Sheehan, the NYPD’s deputy commissioner for counterterrorism under Kelly, says that while the NYPD created many new defensive programs to protect the city after 9/11, New York’s main defense depended on information collected by the department’s intelligence division—informants, undercover agents, wiretaps, and surveillance of suspects—independently and in conjunction with the FBI’s Joint Terrorism Task Force. If a police department simply reacts to threats and fails to conduct such investigations, he wrote, “You are not conducting serious counter-terror operations.” Yet most police departments lack sufficient resources to conduct often expensive, time-intensive inquiries, says Kelly. Moreover, the NYPD was sued (unsuccessfully) by activists for allegedly profiling and harassing young Muslim men. The AP published more than 30 articles—and won a Pulitzer Prize—claiming that NYPD surveillance of young Muslims was violating their privacy and other civil liberties. As a result, fear of being criticized—or sued—has dissuaded some police departments from trying to conduct such investigations. Such “overblown political correctness,” Sheehan writes in the New York Daily News, “limits the ability of security personnel to do their jobs in an appropriately aggressive manner.” Translation: it endangers our cities.

The attack in Paris should sharpen the debate over what constitutes an appropriate balance between protecting national security and privacy. It should also convince mayors and police departments to create and invest in their own counterterrorism programs, despite media and civil libertarian protests. No one knows a city’s weaknesses—where criminals can operate, where they buy and trade weapons and drugs, where extremists can operate in the shadows or with neighborhood sympathy or indifference—as well as local cops. And if prevention fails, local cops are the ones who will be called on to respond. As Paris showed, there would be too little time for FBI SWAT teams to show up and save lives.

Strategically, the goal of destroying ISIS and other like-minded groups capable of striking American cities falls to the federal government. Intelligence officials have warned that ISIS seeks chemical and biological weapons and that neither capability is beyond their reach. Homegrown American jihadis must be stopped from traveling to Syria and other conflict zones, where they can receive advanced indoctrination and training. And should American Muslims make it to such places, they must be prevented from returning.

Ultimately, the best defense against Islamist terror, as in most wars, remains a more robust, effective offense. While President Obama vowed to degrade and destroy ISIS, critics have scored the paltry results of his efforts so far. In Senate testimony last May, retired four-star army general Jack Keane warned that Obama’s strategy was failing and would not defeat ISIS. This view is widely held within the American defense establishment. Keane has endorsed sending as many as 10,000 special operations forces to advise and train Kurdish and Syrian forces that want to fight ISIS. He’s also endorsed the creation of “safe” or no-fly zones in northern and southern Syria to stop the continued flow of refugees to Europe. Russia’s Vladimir Putin and France’s François Hollande have drawn their own conclusions about how to punish ISIS and prevent future attacks. Both are conducting intensive bombing raids of targets in Syria. The French are utilizing American intelligence in conducting their strikes.

These offensives are urgently needed to slow ISIS’s momentum, both in the war zone and beyond it. ISIS-like groups have taken hold in more than a dozen countries, and not only in the Middle East. The group’s barbarous appeal continues to spread. Yet Obama has done little to drive a wedge between the majority of Muslims who oppose violence and the violent militants and terrorists who embrace it as a means to achieving their political ends. For instance, Obama has largely kept his distance from Egyptian president Abdel Fattah el-Sisi, the former military man, whom Obama views as undemocratic. Yet Sisi has issued a brave and rare public call for a “reformation” within Islam and the need to initiate multilateral efforts to prevent the militants’ interpretation of Islam from spreading.

Over a decade ago, the 9/11 Commission warned that victory over militant Islamism would not be won by military means alone. Sustained diplomatic and ideological campaigns would also be essential. The commission urged the U.S. to stand up for its ideals to prevent Muslim extremists from winning the ideological struggle within their faith. It is here, paradoxically, that President Obama, rhetorically committed to non-military means of persuasion, has most obviously failed.