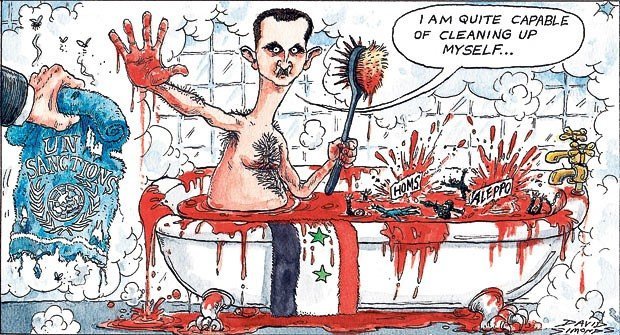 September 12, 2014 11:15 am 0
The Life Civilian Alawites Need To Embrace
On Syria Biden Got Away With Murder
ISIS Will Strike Repeatedly if Obama Keeps Ignoring Assad’s Terror

All the terror Assad has been exacting upon the Syrian people, all the destruction and the misery this mini-Hitler has caused upon the innocent women and children has one purpose: To lead us to the words of Faisal Mekdad, the deputy foreign minister, when he told NBC News that Assad is a “Natural ally fighting the same enemy.”

Assad released the Islamists that formed ISIL to threaten the region just to get to say these words. Newsweek wrote about how Assad formed ISIL on 6/14/ 2014 and US State Department disclosed it in its briefing on August 11, 2014.

Then Assad embarked on the most vicious sectarian war against Sunni women and children in order to make ISIL far more dangerous to threaten the region just to get to say that he is a “Natural ally fighting the same enemy.”

Then Assad boosted ISIL by purchasing oil from them to fund their operations. The Telegraph reported it on January 20, 2014.

Then Assad released James Foley to ISIL knowing well they would behead him thus forcing the US to come to his aid just so Mekdad could say Assad is a “Natural ally fighting the same enemy.”

Assad is the main cause of all terror in the region, yet Mekdad says in the same interview “When it comes to terrorism, we should forget our differences… and forget all about the past,”

Assad wants the US to forget that because of him we have to deal with the most dangerous terror organization Assad created for America.

The CIA just issued a public statement disclosing that ISIL fighters may number up to 31,500. This is 3 times the earlier estimate and I believe it will swell even more because our President is striking ISIL but leaving Assad and the Mullahs run rampant with their terror.

That Assad terror is now asking us to “forget our differences… and forget all about the past.”

Further, Assad wants the US to forget the mass murders he committed with such savagery, and which remind us of the Nazi era.

Assad wants the US to forget he caused the displacement of 11 million Syrians and the death of 200,000.

Assad wants the US to forget about the 150,000 prisoners living under hellish conditions or the 11,000 he already tortured and murdered.

Assad wants the US to forget the skeletons of his tortured victims that many remind us of our visit to the Holocaust Museum in Washington DC.

Then Mekdad puts the icing on the cake by saying, “It takes two to tango… We are ready to talk.”

In other words, Assad wants to drag the US into a Tango where the Arab world would envisaged it as if the US was an accomplice in the crimes against humanity Assad committed.

Assad knows that if the US joins forces with him, ISIL will become much more dangerous. Since the US began bombing ISIL in Iraq, its numbers swelled. One can imagine what would happen when Obama strikes ISIL in Syria without striking Assad.

The more dangerous the ISIL Assad created, the more embroiled the US will be in a war with 350 million Arab Sunnis. Unlike Afghanistan where the US can pull out without any damage to its interests, the same cannot be said about the Middle East.

If Assad did not believe Obama is primed for this trap, he would not have made this offer. He never made such declarations when George Bush was our President.

Is Barack Obama that naïve? Maybe he is, and maybe he is not.

Either way, come the November elections, Mr. Obama’s actions will be under much more scrutiny.