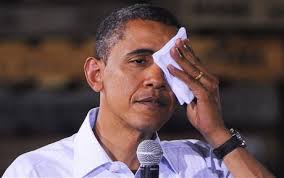 When we elect an ignorant president

September 12, 2014 5:06 pm 0
Syrian Babushka Opposition
Why the Syrian Opposition is in Turmoil
Obama has presided over a moral and strategic disaster in Syria

The too-little-too-late Syrian policy of Mr. Obama is producing interesting comments from Syrians fighting on the ground in anticipation of US air power to “manage” ISIL. Some comments reflect the warnings I published in my Blogs, others reflect the deep distrust and concerns the opposition, be it ISIL fighters or the more moderate FSA are expressing. Either way, it is an insight of what the Syrians fighting Assad are thinking.

Warning: Most of these comments are by extremists (NY Times, of course), which are the ones we should fear the most. The moderates backed by Saudi Arabia will tow the Saudi line and hail the US coming to their aid, the same way the Iraqi Government tows the line of the Iranian regime and have hailed Iran coming to their aid against ISIL.

Below are some of the comments reflected in what happens when we elect an ignorant president.

The message below deals with why the US did not strike the terror of Assad, which is exactly the message ISIL is spreading on the Social Media to recruit. Raqqa is ISIL stronghold and this paragraph is by one of their fighters.

The statements below are by Aron Lund, Syria in Crisis Blog of The Carnegie Endowment for International Peace. It points the finger at Obama’s failures in Syria.

Mr. Lund’s other statement shows the necessity of battles (As the US allied herself with Stalin in WWII), but it also shows that the concern over US weapons falling in the wrong hands is a legitimate one.

The statement below is the result of Mr. Obama spending too much time on the Golf course instead of protecting US interests overseas.

Finally, the statement below expresses the same concept I have been preaching. Strike ISIL and strike Assad.

How potent is ISIL?

When we elect an ignorant president, not only are we forced eventually to interfere to extinguish deadly fires as we are doing now, but the costs are much higher as a result. In Syria, the hardcore Islamists and terrorists control the landscape because Obama was on the Golf course pretending to protect us from evil.

This is what happens when we elect an ignorant president.