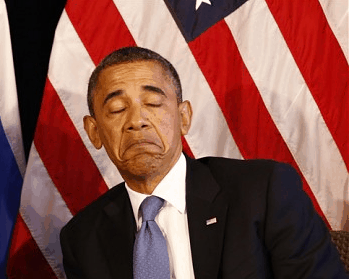 Iran is leading Obama by his nose

We have elected an intelligent president who acts like a fool is the best way to describe Barack Obama when it comes to US foreign policies. Instead of learning from his past mistakes, he is doubling down on his mistakes.

In one year, the whole region will be on fire just because he refuses to strike Assad while Assad continues to gas Syrians and kill civilians indiscriminately.

Forget the killing of civilians for a moment, Josh Rogin wrote the following in his piece entitled “Syrian Rebels: We’ll Use U.S. Weapons to Fight Assad, Whether Obama Likes It or Not”

Although they sometimes clash (Assad and ISIS), the Assad regime has mostly avoided fighting ISIS, letting them battle the other opposition groups unfettered. ISIS also sells oil from its vast oil fields in northern and eastern Syria directly to the Assad regime for cash. These transactions have continued, even as ISIS has begun to attack government sites, like the Taqba air base.

For Obama to know Assad is behind ISIL and yet continue to protect him shows just how much Iran is leading Obama by his nose.

For those who understand the Assad regime well, empowering and funding ISIL makes all the sense in the world. For the rest of you, just follow Obama who is leading America down the path of new wars our nation could never win with 350 million angry Arabs.

Iran is leading Obama by his nose because nothing would please the Mullahs more than to see its archenemy the United States battle its other archenemy the Arab Sunnis. This is why Assad created ISIL, something Obama knows too well, but he is so afraid of Iran that he is asking the moderate opposition only to battle ISIL, but not Assad. Rogin describes it this way in his article.

President Obama has reversed course, and is finally promising to openly arm the moderate Syrian opposition. But he wants the rebels to use those weapons to fight only ISIS, not the Bashar al-Assad regime. The Syrian rebels plan to use them to fight both at the same time.

Obama is an Iranian hostage. Should he strike Assad, Iran, more than likely, would pull out of the US-Iranian talks on nuclear disarmament. Therefore, Obama is leading the US down a path of war with the majority Sunni population just because he is afraid to anger the Iranians.

Obama knows only how to use his powers to harm Americans he opposes, never our enemies abroad.

Once he leaves office, president Obama will be known, more than likely, as the “Vagabond US President.” Our allies overseas dislike him, half the country dislike him, and the other half are disillusioned by his on again, off again tendencies.

Even Reverend Jeremiah Wright won’t take him back.