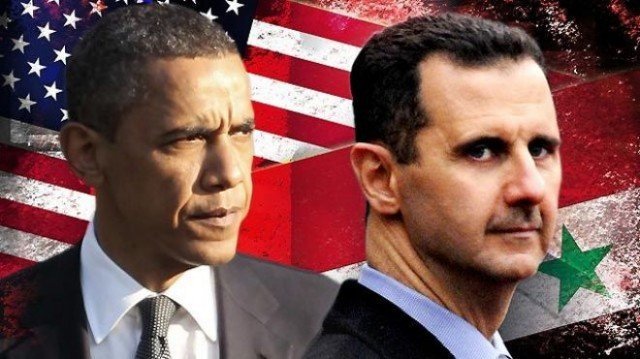 September 15, 2014 12:23 pm 0
Don’t hold your breath
A wave turns into a tsunami of terror
Americans still clueless about Assad Terror

On the surface, it makes sense to the White House. If the US is unwilling to have US boots on the ground, somebody has to take on ISIL in northern Syria. Since the White House cannot arm Assad to defeat ISIL, it has chosen now to fund and arm the moderates in the Syrian opposition to finish ISIL.

Denis McDonough, the architect behind the whole fiasco in Syria, has a new brilliant idea on how to resolve the Syrian problem. Fund and arm the Syrian moderates to battle ISIL but ignore Assad all together. He told Fox News Sunday:

“If it’s not the Syrian opposition, trained and equipped by the United States, authorized by Congress and the president … then it’ll have to be U.S. troops. The president made a decision on that. We’re not going to do that.”

Fair enough. Obama does not want US boots. However, let us dissect this policy to show you how much it helps the Assad regime.

First, it took over 3 years of mayhem, mass killings in Syria that could have been avoided had McDonough, and his boss, realized early on the folly of ignoring the Syrian civil war. He and the President pretended Syria did not exist. Now that we have ISIL, the offspring of Obama’s isolationist policy, threaten everyone who disagrees with its savagery, McDonough has no choice but to disown that offspring in his habitual minimalist and dangerous fashion.

More importantly, moderates in Syria do not grow on trees. We have watched over the last three years more Syrians fighting the Assad regime join the extremists than the other way around. They did it because Obama refused to assist the Free Syrian Army.

By arming today the moderates the Assad regime considers as its only danger, and directing their weapons to defeat ISIL without striking the Assad forces, Mr. Obama is in effect collaborating with Assad to deny the moderates any chance of surviving this war while they attempt to destroy ISIL themselves.

In fact, I think Obama must love Assad. He is made of the same socialist, anti-America, anti-exceptionalism, Imperialist-bashing ilk.

Khalid Abu Toameh wrote an article for the Gatestone Institute entitled “Why Many Arabs and Muslims Do Not Trust Obama,” in it, he writes:

Many Arabs and Muslims identify with the terrorists’ anti-Western objectives ideology; they are afraid of being dubbed traitors and U.S. agents for joining non-Muslims in a war that would result in the death of many Muslims, and they are afraid their people would rise up against them.

Also, they do not seem to have much confidence in the Obama Administration, which is perceived as weak and incompetent when it comes to combating Islamists.

“This is not our war and we should not be taking part in it.”

That is how many Arabs and Muslims reacted to US President Barack Obama’s plan to form an international coalition to fight the Islamic State [IS] terrorist organization, which is operating in Iraq and Syria and threatening to invade more Arab countries.

Obama is feckless to begin with and feckless until the end; he is Ignorant from the beginning and even more ignorant at the end.

Any wonder why our allies in the Middle East, Europe, and Asia do not trust him, which indirectly is affecting US interests.

857 days left before Obama’s leaves office and his damage is contained; that damage will be hurled then for the historians to analyze its catastrophic results.

You Think Obama Did Not Know This Was Going to Happen?
If The Middle East Was a Shopping Mall, Arab Lives Would Be The “For Sale” Signs
Who is Protecting Assad Inside the Arab League?
Slippery Barack Obama 976