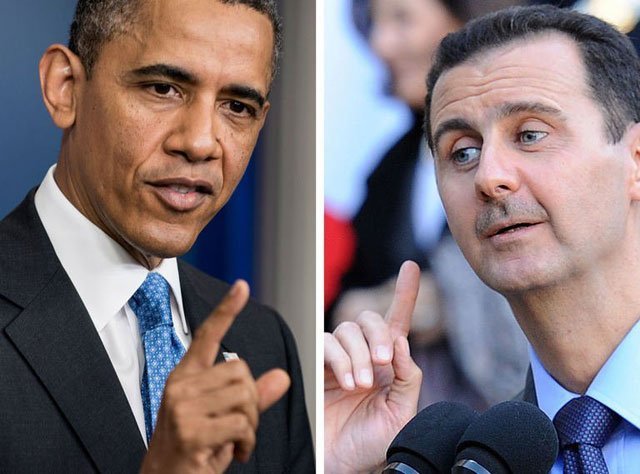 Is Assad the Son Obama Could Have Had?

July 19, 2013 8:57 am 0
At least 16 dead as Syrian school hit in air strike
Beware of the Whispering Daggers
Why the Syrian Opposition is in Turmoil

Published in the Times of Israel (Is Assad the Son Obama Could Have Had?)

For those of us working Syria around the clock, forming patterns are worth a thousand images.

Consider the pattern when Mr. Obama refused to arm Syrian army defectors who survived the scrutiny of Assad’s vetting, and who abandoned their posts and duties, not for sectarian, but for humanitarian reasons, as compared to today’s pattern of Mr. Obama willing to arm Islamist groups, not enough to defeat Assad, but enough to cause more upheaval in the region.

Consider this other pattern when Mr. Obama offered the Muslim Brotherhood front row seats during his infamous Cairo speech in 2009, as compared to Mr. Obama’s treatment of PM Netanyahu when, in March of 2010, he was abandoned for an hour in a White House room while Obama dined with his family.

It is obvious Mr. Obama has some beef with US allies and lots of empathy for US enemies. Slowly and methodically, I believe he is trying to reverse the US role around the world using Syria, and the Middle East in general as his platforms. Just imagine how gently he has to tread to exert his extraordinary powers without raising too many eyebrows.

Between two evils though, Mr. Obama will always refer to the one best suited to break the back of the US agenda. When it comes to US allies, the Islamists in Egypt are better suited and Iran is better suited than the Islamists in Syria are. This explains the schism of supporting rebellious Islamists and a resistant Iranian axis in two different geographies.

Indeed, politically speaking, Mr. Obama is acting like a scalpel cutting the good doctor at the table while making everyone believes he is the doctor. Can you imagine how difficult is his job?

The fact that Mr. Obama has indirectly caused more atrocities in Syria does not seem to register with him; his policies are mostly enabled to justify his support for third world ideas blaming the US for atrocities he believes it committed. Consider his choice, in Samantha Power, for the next UN Ambassador to get an idea where Mr. Obama’s center of gravity is. Her quotes are the quotes he said while a student and that is why we know so little about him. No one took him seriously.

In fact, causing atrocities indirectly today to press a point about perceived past atrocities is unconscionable.

Had Mr. Obama intervened in 2011, by lending his full support behind the liberal and secular Free Syrian Army defectors, Syria would have fared far better today for everyone concerned. That policy, though, helps US vision and its freedom agenda, so scratch it in favor of letting the Islamists and the extremists occupy the vacuum and run amok.

In reality, I believe he thinks Mr. Assad’s resistance, whether a form of deception or not, is quite understandable and so are the ones blaring from the Minarets of the Islamists.

Heck, Mr. Obama himself thinks he is a resistant President.

None of his policies has caused harm to Assad so far; just the opposite, his administration has been asking everyone not to interfere in Syria since 2011 and lately it has leaked to the press Israeli preemptive strikes against the Syrian regime to embarrass Israel for defending herself.

The US Congress today is more interested in derailing Mr. Obama’s third world foreign policy plans than helping the Syrian people remove Assad from power. Ostensibly, Syrian civilians are caught, like Sardines, in a shark’s net with several sharks already drawing each other’s blood. With such spectacle, who cares about the Sardines?

The whole stage just makes you wonder if Mr. Obama thinks Assad, for all intended purposes, is the son he could have had.

Is Assad the Son Obama Could Have Had?