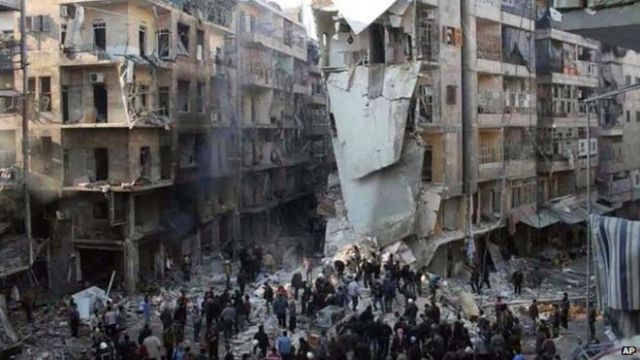 June 28, 2015 7:00 am 0
The Rebels Are Gaining Ground in Syria
The Significance of the Battle for Aleppo
We stood by while others carved up Syria

Assad barrel bombs against civilians have come to symbolize one fact: The West is complicit with the Assad regime when it is willing to use force against ISIS but not against Assad and his devastating use of lawfully forbidden barrel bombs.

In case you wonder what the Arab street thinks, we suggest you read: “Face reality: Many Muslims support ISIS“. Only if one is able to place the puzzle pieces in the right place, can one see the larger picture.

Many analysts have argued in the past the support for ISIS stems from an emotional confusion or emptiness, or nostalgia for a Mohammadian era of discipline and justice. Very few, except those who truly know, have argued for the sectarian bias that striking Sunni ISIS but permitting Shiite Assad to massacre at will with his barrel bombs this policy has caused.

In fact, Shiite Assad barrel bombs are like spark plugs to Sunni ISIS engine of terror.

Attribution of their arguments sometimes come close. Take the instance when Ambassador Samantha Power hits the nail on the head when she said publicly that to defeat ISIS, Assad must go first. Or when Obama himself said it as well.

But then Obama is known to say things that politically comfort him. The man, to this day, cannot comprehend why there has been a surge of terror and mayhem in the region.

Others argue, fine but what happens after Assad is deposed? With no solid answers, or with answers that map one bad case after another, we revert back to solving the ISIS big problem by timid force and timid force alone, which is oxygenating ISIS rather than harming ISIS.

Meanwhile, Assad continues with his barrel bombs that help ISIS recruit Sunnis and no one is able or willing to stop him. Obama is not willing to draw the anger of Iran at a time he needs Iran like a bride needs a bridesmaid, and Putin is unwilling by cooperating with the U.N. because ISIS serves his larger purpose of striking fear into the heart of Europe for its sanctions against his regime.

So, the barrel bombs continue, ISIS continues to recruit to avenge the strikes of the U.S.-led coalition, and the Sunni street continues to watch Sunni mothers and children die while the world ignores them aloofly.

This is Obama’s canvas, Obama’s paint job, and Obama’s signature. Had he helped the Syrian Free Army with weapons to defeat Assad in 2011 instead of kowtowing to Iran, ISIS would have never existed.

Assad barrel bombs are like spark plugs firing the ISIS engine of terror no one is willing to stop. Not even for humanitarian reasons.

So, while pundits pour over the unfortunate remains of terror victims in Tunisia, Kuwait, and France, remember that the Assad barrel bombs, which clearly demonstrate a Western policy of sectarian bias against Sunnis, have become a source of recruitment for ISIS and a tool to avenge the Western strikes.