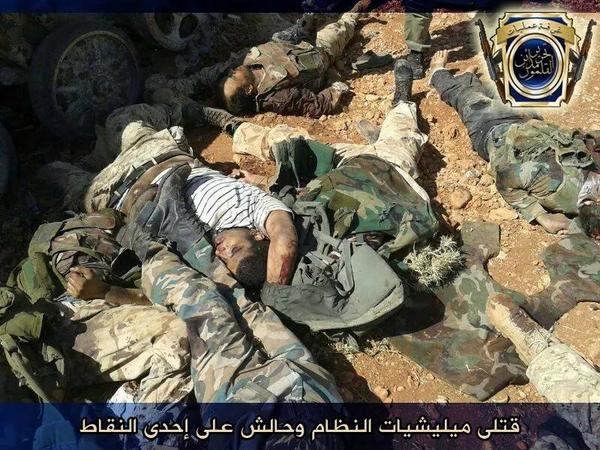 ARA News reported that at least 50 pro-Assad militant fighters of Hezbollah were killed in a series of attacks by rebel factions near the Syrian capital Damascus, military officials said on Sunday. Dozens of Hezbollah militants killed in attacks.

Rebels of Jaish al-Islam (Army of Islam) and allied groups launched several attacks on military positions of pro-Assad troops in the Eastern Ghouta of Damascus, targeting members of the Lebanese Hezbollah militia.

Militants of Hezbollah are heavily deployed alongside the Syrian regime’s army at several fighting fronts, including Damascus, Aleppo and Qalamoun. The Shiite militia is known for its allegiance to the Syrian psychopath Baschar al-Assad in the fight against various opposition groups.

Speaking to ARA News in Damascus, member of the Army of Islam Farouq Abu Asmaa said their forces launched several attacks on Hezbollah positions in the vicinity of the Syrian capital on Sunday, using heavy machine guns and mortar fire.

Backed by local rebel groups, the Army of Islam clashed with pro-Assad troops in the towns of Sawan and on the environs of the “Army Devision 39” in Damascus suburb on Sunday.

“We have collected dead bodies of more than 50 Hezbollah fighters subsequent to the operations. Our forces made new gains against pro-Assad militants,” Abu Asmaa said.

“We will extend our operations in the coming days, and we promise the Syrian people that the victory against Assad and his thugs is coming soon,” he added.

In the meantime, a Syrian army official confirmed in a statement the rebels’ attacks on Sunday, saying the army forces and its allies will fortify their positions in Damascus and its countryside to deter such offensives in the future.