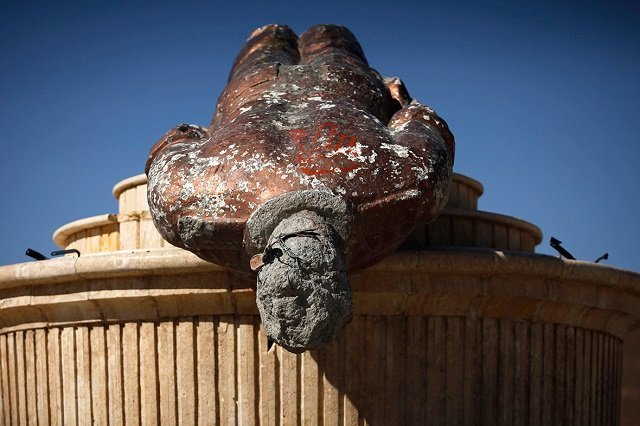 September 3, 2013 12:52 pm 0
Barbarism Comes in Words Too, N’est Ce Pas Joshua Landis?
In Syria, Signs of Civilian Massacre
What Have the Sunnis of Syria Done to Deserve Ethnic Cleansing?

The difference between a Syrian Alawite and Assad is that one wants security for his family and freedom to practice his beliefs and the other wants to rule Syria by pretending he offers security and freedom.

Please do not tell us that the smartest minds in the Pentagon cannot figure a way to provide the Alawites for what they have the right to without keeping Assad to spoil the mix. All those fighting for Assad today can fight for Syria tomorrow if we put a sensible strategy in place to provide essential guarantees to all the minorities of Syria.

Protect those guarantees by making sure the new Syrian army is re-trained to protect Syria the same way the Egyptian army is protecting Egypt.

We must separate Assad from his armies not only to win in Syria but also to facilitate rebuilding the country to pause no danger to anyone and especially to herself and its people. With Assad gone, his armies will protect Syria.

Many are concerned about the fate of the minorities and they should be. Without a vibrant minority able to co-exist with all Syrians and Syrians able to forgive and forget the minorities not directly implicated in the bloodletting (250 war criminals in Syria deserve to be hauled in front of international tribunals), there is no reason the New Syria rising cannot become an example for other nations.

Instead of speaking of costs to engage Assad in Syria many Arab countries are willing to pay, maybe Gen. Martin Dempsey, Chairman of the JCS, should concentrate on how to remove Assad with the least costs to US interests and those of our allies in the region like Jordan.

What choice will the Alawites of Syria have when they realize that with Assad gone, they need to secure the best guarantees possible while keeping their eyes on the ball by fully participating in building the new Syrian army?

What choice will the Sunnis have if they realize that without those guarantees and acquiescing to the structure and mission of a new army, Assad will continue killing.

We are concerned about the safety of the Christians of Syria but not concerned they will refuse to participate. In our many years of observing Arab politics, we have yet to see the Arab Christian community select violence over peace. Some rogue Christians are fighting with Assad, but they are a tiny exception.

Further, all Syrians must extend their hands to the Shia of Syria because we all share a nation and the same aspirations; and because nothing undermines Hezbollah than such a gesture.

Our hope is that Senators McCain and Graham read this Blog and begin developing a plan they can help the President implement to protect the minorities. Separating them from Assad is 90% of the battle.

Once they feel safe and Assad gone, Syria will move in the right direction.

It is not about the Alawites of Syria, It is all about Assad
Salute the Alawites Revolting Against Assad
It’s a Numbers Game, Stupid Assad Regime!
Syrian Revolution 1335