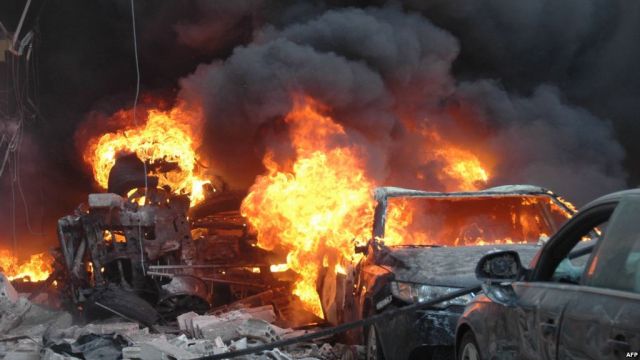 Syrian state television said dozens of civilian Alawites were wounded when two bombs exploded on Sunday in the central Syrian city of Homs, which lies on a crucial supply route between the capital Damascus and the Mediterranean coast.

Officials said at least 27 civilian Alawites were wounded when a car bomb was detonated in a busy commercial street in the central Karm al Loz neighborhood. Footage of mangled cars and destroyed shops and homes were broadcast on state media.

Another bomb later exploded on the southern edge of the city, wounding ten civilians, according to the state news agency SANA. No one claimed responsibility for the twin bombings.

Residents said the two districts targeted were inhabited mainly by Assad’s civilian Alawite minority sect in the city of around one million inhabitants.

As long as Assad targets civilians with his barrel bombs and chlorine gas, unfortunately this is the life civilian Alawites need to embrace. A reality of life under the terror of Assad for the long overhaul.

TFS condemns all and any terror attacks against any civilian life.

The city of Homs lies near the intersection of Syria’s main north-south and east-west arteries, and is on a crucial supply route between the capital Damascus and the Mediterranean coast.

The city was a center of the insurrection against Assad’s rule and was an major opposition stronghold until it was retaken by the army in May 2014 after Assad starved its population and his snipers targeted pregnant women foraging for food in garbage heaps.

Since, only one neighborhood remains under opposition control.

The Syrian army and militia fighting alongside it have lost swathes of territory to insurgent groups, including the northwestern province of Idlib which fell to an alliance of Islamist militants, including al Syria’s Qaeda offshoot, the Nusra Front.

Assad has also lost ground to rebels in southern Syria.

After the loss of Palymra, a symbolic and militarily strategic city in Homs province, and nearly all of Idlib province, Assad appears to be focusing on maintaining control of a western region that includes the capital Damascus, Homs, and the coast, his ancestral home.