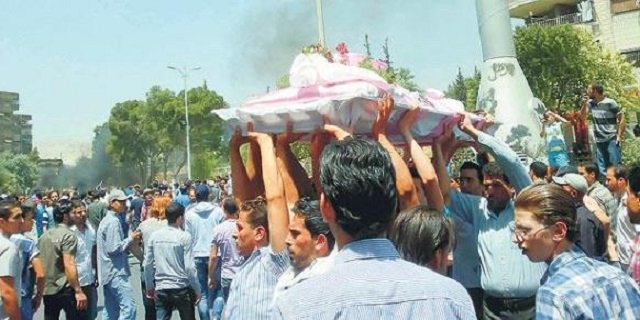 August 8, 2015 8:41 am 0
Reasoning with Barbarism
Son, Prepare Your Children for War
What Have the Sunnis of Syria Done to Deserve Ethnic Cleansing?

Tensions are running very high in the city of Latakia and its surrounding areas after the incident that took the life of Air Force Colonel Hassan al-Sheikh.

Two days ago, a cousin of Syria’s Baschar al-Assad shot dead al-Sheikh in a road rage incident in Latakia.

Suleiman al-Assad, a first cousin once removed and son to Hilal al-Assad, killed Colonel al-Sheikh “because he overtook him at a crossroads” Thursday evening.

The Alawites living in the region are demanding that Suleiman al-Assad be executed for his crimes. Their reasoning rests on the idea that Alawites are being killed in droves fighting the Islamist rebels for another corrupt al-Assad to help them with his cold murder.

Never in the history of the Assad family has one Assad deliberately sentenced another Assad to die. Here at TFS, we doubt that the incident in Latakia will change this trend.

Every Assad family member is blessed with a DNA that most likely also existed in the bodies of horrific killers like Hitler and Stalin. They are all savages who have no respect for human life even when that human life, like that of Colonel Hassan al-Sheikh, defends their regime of  terror.

If Assad does not comply with the wishes of the people of Latakia, we highly recommend that Latakia makes its own laws independent of Damascus. It will go a long way in establishing order among a minority in dire need to protect itself through law and order.

The sooner people like Suleiman al-Assad are removed permanently from the Alawite society, the safer they and the Christians of Syria will be.