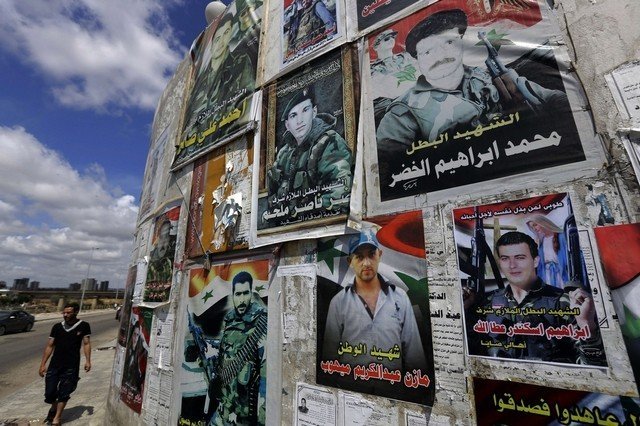 Aleppo is Costing Too Many Alawite Lives

August 12, 2015 8:47 pm 0
Syrian Youth: The Fight Within
“Al Assad! Or we set the country on fire!”
In Syria’s war, Alawites pay heavy price for loyalty to Bashar al-Assad

There are several fierce battles being fought across Syria between the Assad regime and the rebel forces trying to overthrow Assad.

One such battle is in Aleppo raging over the control of the Kweres Air Force Base and the Air Force Academy long bastions of Assad power in northern Syria. The battle pegs Alawites mostly from the city of Tartus and Islamic State fighters.

The battle has produced scores of Alawite lives. According to activists on the ground, so far some 39 Alawites lives have perished fighting since August 9 of whom 29 are officers with 3 holding rank of Colonel or above.

The casualties among the Islamic State fighters is 33. Some of the deaths among the Alawites were attributable to 3 separate suicide car bombs, which has become the signature achievement of IS fighters the way it was for Assad during the Iraq war.

The battle for Kweres has witnessed heavy shelling on both sides, as well as aerial bombardment led by regime jet fighters.

The coastal city of Tartus has suffered more than its share of Alawite lives dying during the war. So much that it has been renamed the City of Martyrs. Ex-CIA analysts call it the Mother of Martyrs.

Assad has manufactured ISIS by releasing Islamists from his jails to assist him in raising the worst specter of his alternative. ISIS got out of control and became a real threat not only to Assad, but also to the West for its Caliphate creation and Sharia-minded evil.

Aleppo is costing too many Alawite lives at the hands of forces Assad has unleashed upon Syria. Not all the Alawites believe this truth because most have been brainwashed by the Assad propaganda machine. However, the smart Alawites better separate themselves from the Assad regime and begin the process to unite with Muslim moderates to oppose all terror. If not, more Alawite lives will die needlessly, and no Khamenei or Obama will be able to save them.

Just remember who was defeated in Afghanistan when two superpowers attempted to tame its terror.

Aleppo is Costing Too Many Alawite Lives