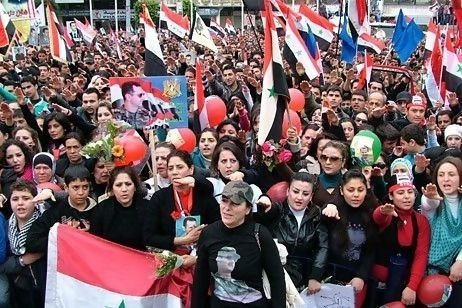 Khamenei Fights to the Last Drop of Alawite Blood

May 18, 2015 3:10 pm 0
Reconciliation without Assad
One Town Buries 20 Alawites Fighters in 48 Hours
The Alawites of Syria Started a War to Finish Them

Animal Farm has arisen in Iran. Orwell would be pleased.

In the cocooned-safety of Tehran, Persia, the black-turbaned Shiite Wizard-of-Oz Ayatollah Khamenei tweets about his love of children learning to read.

Meanwhile, in the pursuit of his ongoing attempts to effect a Persian genocide of the Jewish and Arab peoples, Khamenei inflames, instigates, and arms any Muslim who wants to kill any Jew, Christian, or adherent of any other sectarian form of Islam.  All Arab Islamic extremists, whether they be Shiite, Sunni, Sufi are welcome to Khamenei’s weapons and military advice, although Shiites are preferred.

Ayatollah Khamenei, and his band of megalomaniacal Iranian henchmen, are literally and figuratively fighting to the last drop of the blood of 2 million Shiite Alawites of Syria.  And, with the Syrian rebels about to capture the topographic gateway to the Alawite-predominated Lattakia Syrian coast, Shiite Alawite blood is about to turn the waters red.

As Khamenei piously, ad nauseum, intones the sanctity and purity of his Iranian Shiite Revolution, at 5 a.m. in Tehran, the children of his genocidal Shiite henchmen are tooling around Tehran in 2015 Porsche Boxter GTS two-seaters, one of which, accelerating to 120 miles an hour, hit a tree, killing the two Iranian elite teenagers inside. The New York Times report, “In Iran, Fatal Porsche Crash Unleashes Middle-Class Anger at Elites”, relates that:

“What rankled most was the cocktail of double standards that the crash symbolized, particularly the intertwined issues of rising corruption and inequality.

“During the tenure of the former president, Mahmoud Ahmadinejad, a select few, often well-connected, individuals were catapulted into fabulous wealth after having been granted rights to sell oil, dollars and gold. These ‘middlemen’ started venturing into other businesses, often spreading a culture of corruption, economists and government, officials say.

“Many of these middlemen continue to sport their three-day revolutionary beards, in a sign of their loyalty to the system. But their children shop in Dubai, United Arab Emirates, for designer clothes, and tool around in expensive cars in a country where prices for everyday goods have tripled or more and many can no longer afford a new car, even locally produced.”

To understand the situation more clearly, note that the semiofficial Mashreghnews website reported in September that nearly 100,000 luxury cars had been imported since 2009, even though the owners have to pay a tax of 140 percent. So a Porsche like the 2015 Boxster GTS that was wrecked in the crash, selling for about $75,000 in the United States, would cost at least $178,000 in Iran, depending on availability.
And many of the car owners drive around town picking up girls, in a practice locally called “dor, dor,” the Shahrvand newspaper reported on Wednesday.

“The nouveaux riches dress, speak and act differently, in contempt of urban and social rules,” said Nader Karimi Joni, a journalist and activist, explaining the rage provoked by the crash. “They show off their privileged situation and enjoy humiliating others.””

So, while Khamenei preaches sobriety, piety, and planting trees, the ruling class of Iran are raking in billions of dollars in profits based on sowing bedlam and mayhem and instigating the murders of hundreds of thousands of Muslims Arabs and thousands of Jews throughout the world.  There are two reasons the Iranian ruling class loves the sanctions: first they are developing a nuclear arsenal to create even more chaos, and second, they love the Iranian black-market they created which allows them to exploit their own people.

In an Islamic analog to George Orwell’s satire Animal Farm the ruling Iranians play the role of the pigs.  First, the Iranian Revolutionaries say “All animals are equal”, or its equivalent, “All Muslims are equal.”  Then, they proceed to the Orwellian “but some animals are more equal than others” by saying that “Some Muslims (i.e Shiites) are more equal than other Muslims.”  Then they proceed to “Four legs good, two legs better!” by saying “Iranians good, Iranian Revolutionary Guard better!”  In short, Khamenei’s Revolution is a fraud.

And where is President Obama, the erstwhile leader of the Free World?  Obama is enabling this genocidal corrupt-to-the-core regime to acquire a nuclear weapons’ arsenal.  Obama has to now baby-sit American-flagged ships through the Straits of Hormuz with US destroyers, so Iran won’t hijack them.  But, Obama who can’t trust Iran not to hijack US-flagged ships in the Persian Gulf, is the very same Obama who is trusting Iran with a nuclear-weapons industrial infrastructure buried deep inside Iranian mountains.

Which bring us back to the question: Would Iran arm Assad with a nuclear bomb if Iran could?  Assad has already murdered 300,000 Syrians.  What’s another 300,000, or 1,000,000 Shiite or Sunni Syrians to Assad or Khamenei?  Just a bunch of Animal Farm “4-legged animals.”

And, what would the world do?  Absolutely nothing.  Why?  Because Iran could, and would, use the nuclear bombs on them.

Khamenei Fights to the Last Drop of Alawite Blood

About War Crimes and Sectarianism
Has the US selected an Assad secret alternative?
Barbarism Comes in Words Too, N’est Ce Pas Joshua Landis?
Radicalism 567