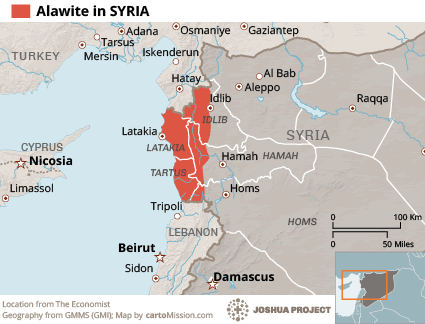 December 7, 2012 10:18 am 0
Syria’s Alawites Face Their Worst Nightmares
Syrian Youth: The Fight Within
In The Middle East, Democracy is the Real Enemy

In 2000, when Baschar al-Assad had so many opportunities to correct the many wrongs his father Hafez and his uncle Rifaat inflicted upon the Syrian people during the last 30 years to begin the process of healing the country and harmonizing our rich diversity, he chose to ignore his responsibilities. Instead, Assad aligned himself with extremist Iran, attacked the US in Iraq, and terrorized with savagery his own people; thus, sealing the fate of the Alawites in a geography known for its intolerance and lack of value for life. Honestly, the Alawites fast becoming endangered specie.

WHICH WILL OUTLAST WHICH?

For some unknown reasons, even the smartest Alawites believed the Assads were building a dynasty to last as long as the Ottomans. According oneself such freedom with such precise conclusion is dangerous. The reason is because along with it, a ruler swims in the surreal world where the “day of reckoning” is not part of his calculations. He becomes the victim of his own tyrannical successes. Worse yet is what might happen to his people. Not only the hunter becomes the hunted, but the hunted becomes infinitesimally easier to hunt. Which will outlast which? Islam in Syria or the Alawites ruling savagely?

The real tragedy rest in how Syrians will reconcile their views of the Assad regime as they re-construct their lives. In our opinion, the Assad family will come to represent not only Syria’s ugly past but also the excuse for pursuing every Alawite that ever fought with Assad, supported the policies of Assad, or benefited from Assad. Let us not forget that the regime’s atrocities have been well documented with facts, testimonials, pictures, and videos. They should fill a genocide museum one day. All that i8s needed are the collective memories to continuously bridge the seething anger.

Between Syria and Lebanon, there are probably over 2 million Alawites who will have to squeeze themselves north of Tartous. After liberation from the Assads, a new majority Sunni-controlled government will never relinquish access to the Mediterranean. A breakaway mini Alawite state is inconceivable. Predicting the Alawites fast becoming endangered specie.

Further, we have to take into account the divisions, once Assad is deposed, simmering below the surface between the different Alawite tribal rivalries. Those with money and power returning to Latakya, after losing Damascus, will have to come to grip with new realities that will divide and demoralize the Alawites. They may even battle themselves as finger pointing takes over.

To describe this as the fall of the Alawite era would not do justice to those Alawites who either fought against Assad or who have feared his terror. The younger, more educated generation will take a leading role eventually to tiptoe out of the dilemma of the Assad’s history; but it will take at least a generation for Syrians to confront the possibility of any reconciliation, if at all. Such cannot happen though if Obama provides the Muslim Brotherhood the prominence to control and terrorize just like Assad.

The first step in saving Syria is to confront the Muslim Brotherhood.

But don’t tell this to a White House bent on providing the MB the prominence it should never deserve.