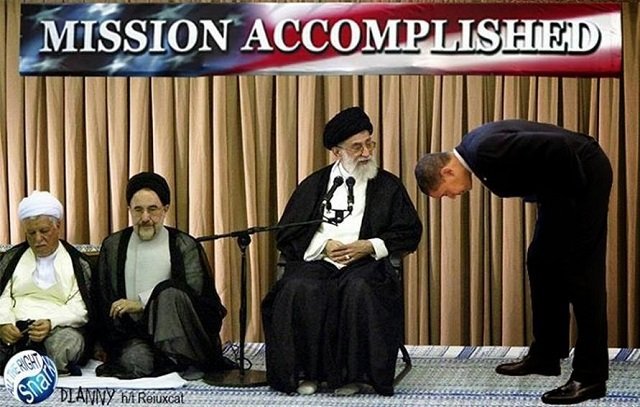 Iran Reminds Obama and Kerry Who is the Boss

The detained Washington Post reporter Jason Rezaian will be back in court Monday, as Iran reminds Obama and Kerry of how weak they are, on what could be the final hearing in his trial for spying on Iran, his lawyer said.

“They told me that this will be the last hearing, but I cannot be 100 percent sure because there are always unexpected matters,” Rezaian’s lawyer Leila Ahsan told AFP by telephone on Saturday.

With this appearance in court, Iran reminds Obama and Kerry who is the real boss.

Rezaian, a 39-year-old dual Iranian-American citizen, who until his arrest was working as the U.S. newspaper’s Tehran correspondent, has been in prison in the Iranian capital for more than a year.

His trial, on charges of “espionage, collaboration with hostile governments, gathering classified information and disseminating propaganda against the Islamic republic,” started in May.

Monday’s hearing at a Revolutionary Court, which usually presides over political cases or those related to national security, will be the fourth in the case. The trial has been held behind closed doors, which, in effect, Iran reminds Obama and Kerry who is the boss again.

“I’ve asked for his release,” Ahsan said, reiterating that she had applied for bail but it has not been given.

Once the judge has delivered the verdict, “the case should go before the Court of Appeal,” she said, without giving details but suggesting the case could have secondary proceedings.

Rezaian was arrested with his wife Yeganeh Salehi, also a journalist, at their home in Tehran on July 22, 2014.

Salehi and a photographer who was arrested on the same day were released on bail after two and a half months in custody.

The journalist, his family and Washington Post executives categorically deny the accusations. President Barack Obama does not believe them otherwise he would have dispatched one of nine aircraft carriers to block Iranian port traffics until Iran released him.

According to his family, Rezaian’s health has been deteriorating. He needs to receive medication to combat high blood pressure.

Rezaian’s detention came in the middle of Iran’s nuclear talks with six major world powers, including the United States which tells us exactly that with his detention, Iran reminds Obama and Kerry who is their real boss.

Here at TFS, we believe Obama and Kerry are siding with Iran. We believe both think Rezaian is guilty of spying.

Iran Reminds Obama and Kerry Who is the Boss