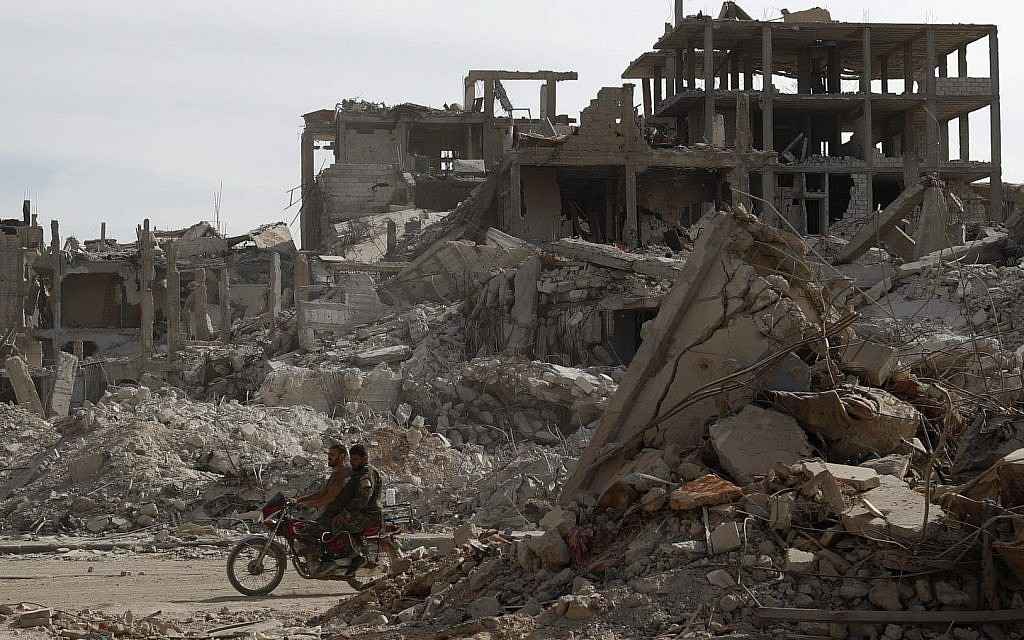 September 4, 2012 1:30 pm 2
In The Middle East, Democracy is the Real Enemy
More Like a Genocide than a Civil War
The Alawites of Syria Have Committed to Israel Destruction

There is enough hideousness inside Syria for any Syrian to consider the offensive quotes that emanate from outside the country. In effect, barbarism comes in words too, Just ask Joshua Landis, one of Assad’s hacks and his miniature Goebbels.

Consider the article the New York Times published yesterday by David D. Kirkpatrick entitled: “Syrian Children Offer Glimpse of a Future of Reprisals“. It’s a good piece of journalism but I take issue with one of the remarks delivered by one of the quoted people Joshua Landis.

For those who do not know Landis, he has been the ventriloquist voice of Assad in America. Landis is married to a Syrian Alawite whose father was one of the elite military high officers. His opinions tilt towards justifying the terror machine of Assad. His Syria Comment Blog has been on a rip ever since 2003 writing articles and analyzing the news from a ruling Assad perspective. But when Assad started killing so savagely, Landis work had to switch to a different mode.

It’s all about justifying Assad’s barbarism. He became the voice in the U.S. justifying mass murder and the gassing of women and children.

BARBARISM COMES IN WORDS TOO

I am one who believes that barbarism and savagery come in words and ideas as well. You don’t need to execute hundreds of people at close range, as the Alawites have done during this war, or split the throats of Sunnis open while handcuffed and alive while filming it to show the barbarism ruling Syria today to understand how difficult the task of Landis is. Just imagine someone who justified Auschwitz to the world on behalf of Hitler and you will understand how Joshua Landis.

Syrians have been oppressed for 42 years at the hands of the Alawite regime of Assad. Illegal detentions, tortures, killings, and so many other acts with some well described in Kirkpatrick’s article. Sunnis, Christians, Druze, Kurds, and any other denomination that opposed the Alawite regime were subjected to unbelievable horrors in ways that a sane mind cannot fathom. Try and sit in an enclosed cubicle that does not measure more than 5 feet by 4 feet for weeks with no break. Try and eat food mixed with your own excrement to survive. On a mass scale, try and live in a 30′ by 20′ cell with 50 other inmates for years. Just imagine the torture chambers and dungeons Syrians, as young as 12-years old, had to endure at the hands of the Assad regime.

Just imagine how difficult Joshua Landis task has been in propagandizing such a machine of terror. But, like I said, barbarism comes in words too.

SUNNIS OF SYRIA ARE FIGHTING BACK

With this past record, what do you expect the oppressed people of Syria to feel towards Assad under these circumstances? Love? Affection?

Or maybe people like Landis and many Alawites ruling today expected Sunnis simply to remain silent, obedient, and living in hell. The Alawites owned the Sunnis like masters own their slaves and they could do as they damn please with them and THEY DID.

What do you think this peaceful uprising was all about? It was about telling Mr. Assad to give Sunnis a break, peacefully. How did Assad respond? With absolute and unimaginable savagery. If the images and videos that the fearless people of Syria delivered to western media did not reach their destinations, there would be more than 100,000 killed in Syria today. Assad father with his brother Rifaat killed over 20,000 Sunnis in two weeks in Hama in 1982 with a total blackout by the international media. Just do the math for 18 months. Syrians will always be thankful to the US and international media, which rightfully publicized the savagery of the Assad regime.

Now comes Landis to tell us this “Now the Alawites believe – possibly correctly – that the Sunnis are going to try to kill them, and that is why the Alawite Army now is killing Sunnis in this beastly way,”

The logic hovers around this notion “We detained them at will, tortured them, enslaved them, killed them and now that we know we have to be held accountable for it, we have to savagely kill them even more”. This is who we are dealing with today. It’s the “possibly correctly” that catches the mindset of barbarism.

WHO STARTED THE KILLINGS?

How did Assad respond to these peaceful marches? Syrians endured almost 12 months of incessant genocide before they started defending themselves. People like Landis want us all to forget this episode of peaceful uprising and simply shoot straight for “They wanted to kill us and we had no choice but to savagely exterminate them” type of propaganda.

Adding to their arsenal of past horrific and inhuman acts, the Alawites today truly believe they have to savagely kill to save themselves. This will certainly resolve the problem for the Alawites if they rationalize to kill even more. Ponder on this logic and you will understand what Syrians have been going through. The worst part? Their shock at learning there would be revenge. Not only do they not see past their nose but they are also dragging the rest of the Alawite community with them and the Christians too.

If the Alawites are foolish enough to follow Assad to the Guillotine, then it’s up to them to fix it by standing with the people fighting for freedom.

Just imagine the effect if a whole region of Alawites stands-up to Assad and tells him publicly what he is doing is wrong. They will become Syrian heroes for saving so many lives. Syrians have always co-existed with each other and there is no reason why it cannot continue; however, today’s path charted by Assad will lead to a Pandora’s box opening with all the accouterments we are used to expect from an angry Middle East.

NOT ABOUT SUNNI REVENGE

Further, I do have doubts about acts of “revenge” in general. The anthem of the Syrian Revolution was a song that Ibrahim Qashoosh wrote and for whom Assad targeted and killed after writing it. It’s called “Yalla Erhal Ya Baschar“, which translates into “Go ahead, Leave O’Baschar”. It does not say, we will kill you, nor does it say we will punish you. It simply asks Assad to leave power.

Where are the wise and reasonable Alawites to say what Assad is doing is wrong; instead of hiding behind more savage killings to justify their earlier episode of despotism? If Landis wishes no harm to any Syrian, why does he not encourage meaningful and reasonable statements instead of “possibly correctly” or attempt to make us all forget how peaceful this uprising was? Further, screaming “revenge” while blasting away with jets against civilians shows the extent of the propaganda offered by Assad. It does not fool the Syrians.

There is no room for revenge in the Syria we want to build; but how can you justify calm and reason when the Alawites produce this logic of “we are killing them even more savagely because we do not want to be held accountable for killing them in the first place”?

How Israel Views the Druze as Opposed to the Alawites
Will Alawite Mothers Save Syria?
The Alawites should invite the US to strike Assad
Assad Agents 39 Assad Genocide 429 Assad Terror 247 Dumb Assad 96 Opinions 1017 Syrian Revolution 1335