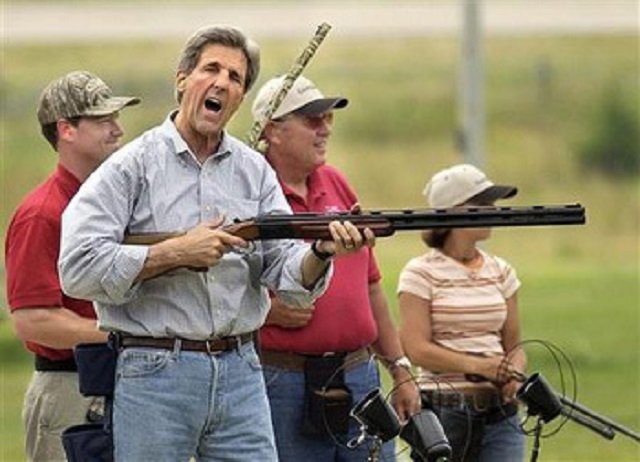 John Kerry Shoots Himself in the Foot, Again

January 22, 2016 6:48 pm 0
Iran Reminds Obama and Kerry Who is the Boss
Useless Kerry Needs to Stop Inviting Himself
Is Kerry Proposing Assad Alternative to Putin?

The Saudi-backed Syrian opposition ruled out even indirect negotiations with Damascus before steps, including a halt to Russian air strikes, are taken; thus, contradicting U.S. Secretary of State John Kerry’s insistence that talks will begin next week. John Kerry shoots himself in the foot, again. The ill-prepared, ill-suited diplomat is punching way above his featherweight.

With the five-year-old Syrian war showing no signs of ending, it looks increasingly uncertain that peace talks will begin as planned on Jan. 25 in Geneva, partly because of a dispute over the composition of the opposition delegation. It is also unlikely peace talks will ever begin unless John Kerry realizes that the pursuit of peace must take into account the interests of the parties, not just his own personal interests. No one consulted the Syrian opposition about the conditions that must be met by the Syrian government before negotiations begin.

Furthermore, peace efforts face huge underlying challenges, among them disagreements over the fate of the psychopath in Damascus and his future, which highlights the tensions between Saudi Arabia and Iran Kerry himself fueled by supporting the Iran Deal.

The Syrian government has said it is ready to take part in the Geneva talks on time. The office of U.N. envoy Staffan de Mistura said he was still aiming “at rolling out the talks” on Jan. 25, and would be “assessing progress over the weekend”.

Russia said the talks could be delayed until Jan. 27 or 28 because of the disagreement over who would represent the opposition.

George Sabra, a senior Syrian opposition figure, said the obstacles to the talks were still there, reiterating demands for the lifting of blockades on populated areas and the release of detainees, measures set out in a Dec. 18 Security Council resolution that endorsed the peace process. John Kerry shoots himself in the foot repeatedly when it comes to Syria.

Sabra, who was this week named as a senior member of the opposition delegation to any talks, told Reuters:

There must be a halt to the bombardment of civilians by Russian planes, and sieges of blockaded areas must be lifted. The form of the talks does not concern us, but the conditions must be appropriate for the negotiations.

The west is the main theater of the war between rebels and Damascus, whose military position has been bolstered since September by Russian warplanes and Iranian ground forces.

Russian warplanes continued to bomb many parts of western and northern Syria on Friday, particularly Latakia province, where the government is pressing an offensive against rebels. So far, Russian air strikes have killed over 1,000 Syrian civilians, twice the number of civilians killed by Obama’s air strikes against IS in one fifth the time.

John Kerry Shoots Himself in the Foot, Again

Kerry to Syria’s Assad regime: ‘Show some decency’
Obama and Kerry’s wishful thinking on Syria
Does John Kerry Realize the Fool That He Is?
Opinions 1017 Tehran John 73 Western Appeasement 483