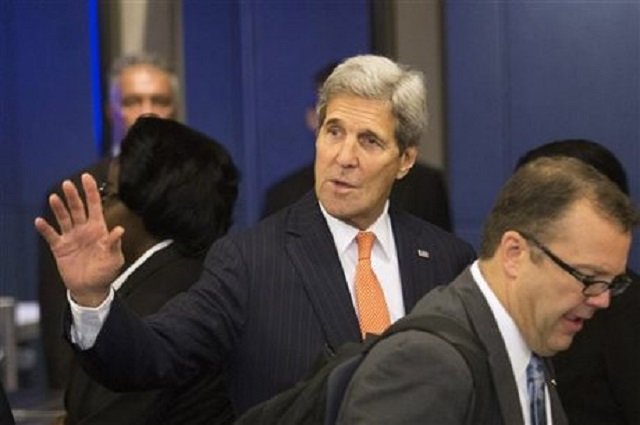 What Did Kerry Trade for Assad’s Barrel Bombs?

U.S. Secretary of State John Kerry suggested Tuesday that Russia and Iran may persuade genocidal Baschar al-Assad to stop indiscriminately dropping barrel bombs on his own people. What did Kerry trade away for a promise to halt Assad’s barrel bombs?

In an interview with MSNBC News on Tuesday, Kerry suggested that the cooperation might go deeper than that and that Moscow and Tehran, Assad’s staunch allies, might also help rein him in. What did Kerry trade away for Iran and Russia to reign in the terror of Assad?

He said that he had discussed the matter with Iranian officials and his Russian counterpart Sergei Lavrov, whom he is to meet again this week on the sidelines of the U.N. General Assembly.

“And we raised that yesterday,” he said. “I did talk with Lavrov about it and I talked with the Iranians about it.”

The question was only raised by Kerry because Assad’s terror barrel bombs affect the flow of Syrian refugees.

Kerry went on to say “they are both in a position, in exchange perhaps for something that we might do, they might decide to keep Assad from dropping barrel bombs.” What did Kerry trade away for Iran and Russia to stop the Assad barrel bombs?

The top U.S. diplomat did not say what he might offer Moscow or Tehran in exchange for halting the bombing, but his comment came as both were being drawn into efforts to fight the Islamic State.

Assad’s barrel bombs have become emblematic of the cruelty and brutality of his campaign to suppress a revolt against his rule — crude explosive devices packed with shrapnel and dropped from helicopters.

Western powers argue that such tactics have cost Assad his right to rule.

What did Kerry trade away for Iran and Russia to reign in the terror of Assad? We believe the promise that the United States will stand behind the notion it was ISIS that gassed women and children in Ghouta in August of 2013, and not the real culprit Baschar al-Assad.

Russia wants to absolve Assad of this crime and Kerry might have just capitulated to this request.

What Did Kerry Trade for Assad’s Barrel Bombs?

Assad is responsible for the carnage in Syria
In 2015, Assad and ISIS Caused the Deaths of Over 55,000 People
Assad Had Nervous Breakdown, Iran Stopped Him From Quitting
Western Appeasement 483