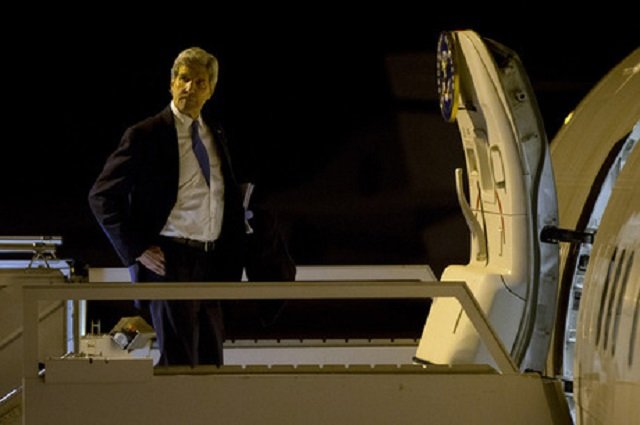 January 23, 2016 4:40 am 0
Why the Syrian Opposition Should Ignore John Kerry
What Did Kerry Trade for Assad’s Barrel Bombs?
Iran Reminds Obama and Kerry Who is the Boss

U.S. Secretary of State John Kerry arrived in Saudi Arabia on Saturday hoping for an easing of tensions between the Sunni power and its predominantly Shiite rival Iran. Reliable sources told TFS that Saudi Arabia did not invite John Kerry. Useless Kerry needs to stop inviting himself.

Kerry was to attend a joint meeting with his Saudi counterpart Adel al-Jubeir and other foreign ministers from the six-nation Gulf Cooperation Council.

He will also hold talks with King Salman and his powerful son, Deputy Crown Prince Mohammed bin Salman, who is the defense minister.

Saudi Arabia and some of its allies cut diplomatic ties with Iran this month after protesters there burned Riyadh’s embassy in Tehran and a consulate in the second city of Mashhad.

Nimr was one of four violent Shiites trained by Iran put to death on January 2 alongside 43 Sunnis. All were convicted of “terrorism”.

“We understand the Saudi anger over the attack on their facilities in Iran,” a senior U.S. State Department official said before Kerry’s arrival.

“But we also understand that lessening tensions is an important objective not only for the United States but for the region”.

Saudi Arabia and its Gulf neighbors perceive a lack of U.S. engagement in the region, particularly in the face of what they see as Iran’s “interference” in Yemen, Syria and Lebanon.

Those feelings crystallized with a historic international deal which this month lifted crippling economic sanctions on Iran in return for a scaling back of its nuclear capabilities.

Kerry has long sought to reassure his Gulf allies about the overtures to Iran, and will continue those efforts in Riyadh. Useless Kerry needs to stop inviting himself because the Saudis consider him the architect of Iranian Mullahs destabilizing the region.

During his one-day stop, Kerry is also to meet Riad Hijab, general coordinator of Syria’s largest opposition coalition, ahead of UN-brokered peace talks planned with the regime of Psychopath Baschar al-Assad.

Kerry arrived from the World Economic Forum in Davos, Switzerland, and on Sunday is to continue to Laos, in Southeast Asia.