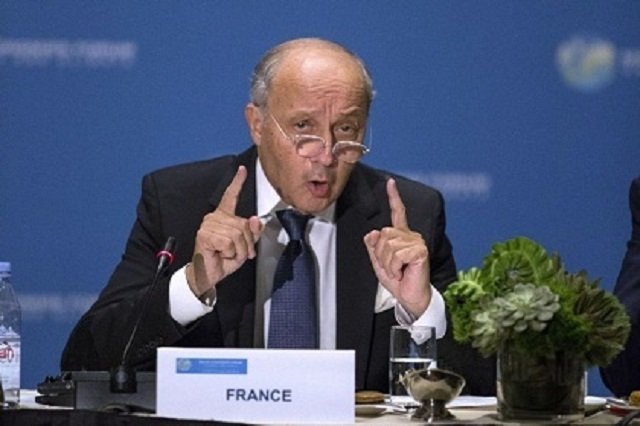 September 30, 2015 9:57 pm 0
John Kerry Shows the World the Idiot He Is
John Kerry Shoots Himself in the Foot, Again
The Worst Agreement in U.S. Diplomatic History

France demanded Wednesday that Russia confirm the targets of its air strikes in Syria, amid concerns they may not have been aimed at the Islamic State group, before accepting the enlarged coalition Moscow wants.

“Of course, we must fight together as hard as we can against Daesh,” French Foreign Minister Laurent Fabius told reporters in New York, using the group’s Arabic acronym.

But he set three conditions for joining the Russian-proposed international coalition fighting the self-proclaimed Islamic State.

Fabius said any air strikes must target IS and other “terrorist groups, not civilians or the moderate opposition.” Kerry never had any conditions placed against Russia.

There are “signs that the Russian strikes did not target Daesh,” he said, calling for the targets of the Russian raids to be verified.

Fabius also called for an end to “indiscriminate bombings” by Syrian forces, indicating he had demanded before the U.N. Security Council that barrel bombs and chlorine attacks be banned in Syria.

Finally, Fabius called for a transition of power under which Baschar al-Assad would step down in order to “give hope to the Syrian people again.”

“The fate of the Syrian people cannot be limited to a horror scenario where they must choose between a criminal regime or barbaric terrorism,”

Fabius teaching Kerry a lesson in tough diplomacy. Shame on John Kerry for looking so weak and helpless every time he meets with Sergey Lavrov.

Russia’s air strikes were its first military engagement outside the former Soviet Union since the occupation of Afghanistan in 1979.

Moscow plans to present a U.N. draft resolution to the Security Council on countering terrorism to build up the fight against IS.