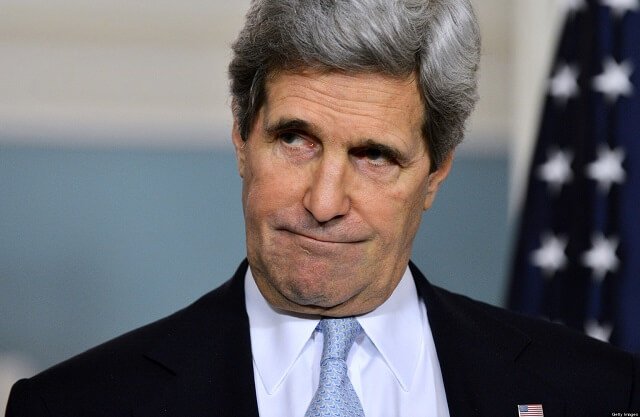 John Kerry wants Syria sold in an Iranian bazaar. Neither Syria’s main political opposition body nor representatives of the armed opposition have been invited to international talks on the country’s war, an opposition politician and a rebel leader said.

The Syrian government in Damascus has meanwhile yet to issue any official comment on the meeting in Vienna on Friday that will bring together about a dozen countries including Saudi Arabia and Iran, which back opposing sides in the conflict.

The Syrian opposition has objected to Iran’s participation in the talks – the first time it has attended such a meeting on Syria – because of its military support for President Bashar al-Assad.

George Sabra, a member of the Syrian National Coalition, told Reuters the failure to invite Syrians showed a “lack of seriousness”. Asked whether the coalition had been invited to the talks, he said: “That didn’t happen.”

“It is a big weak point in the meeting, because it will discuss the issues of the Syrians in their absence.”

John Kerry wants Syria sold in an Iranian bazaar and move on to less complicated issues he has one year to accomplish as his last hurrah. Tehran and Moscow have provided crucial support to Assad’s government, while his regional opponents including Saudi Arabia, Qatar and Turkey demand his departure.

Assad has stuck by his long-held position that “eliminating terrorism” must come first, forgetting that he is the biggest terrorist in the region, after Moscow called on Syria to prepare for parliamentary and presidential elections. Assad says all the groups fighting him are terrorists.

Bashar al-Zoubi of the Yarmouk Army, a group affiliated to the Free Syrian Army, told Reuters that representatives of the armed opposition had not been invited to the Vienna meeting.

“Iran is part of the problem and not the solution, and its participation in the meeting will prove that to the world. This meeting was accepted by Saudi Arabia and Turkey to expose Iran.”

The coalition’s Sabra reiterated his objection to Iran’s participation, saying it could not play a mediation role. “It’s officers are fighting every day on Syrian fronts,” he said.