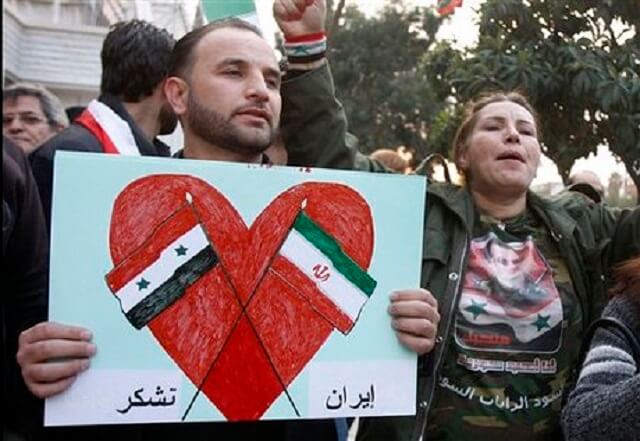 As Iranian Deaths in Syria Rise, Debate Opens at Home

As Iranian deaths in Syria causing a spike in the number of Iranian military officers killed, a rare debate has started back home about the country’s increased efforts to prop up the psychopath Baschar al-Assad.

In Tehran, where war dead are revered and remembered in giant public murals, newly erected memorials are a sign of the human cost that Iran is paying in Syria, amid worries of what is to come.

Though not comparable to the 1980-1988 war with Iraq — in which hundreds of thousands of Iranians were killed — the Islamic republic’s role in Syrian hotspots such as Aleppo has intensified.

The past two weeks have seen the deaths there of one of Iran’s best known generals, Hossein Hamedani, two colonels and nine other members of the Islamic Revolutionary Guards Corps (IRGC).

The mounting toll has followed Russia’s launch of an air campaign in support of Assad that has coincided with an escalation in the ground war.

The confluence of events has for the first time in Iran led some to openly question the country’s four-year involvement in Syria, with concerns aired on social media.

One online post following confirmation of the two colonels’ deaths, comparing them to those who fell in the conflict against Saddam Hussein, said:

“We shouldn’t lose our commanders so easily. This is a mistake that we also often made during the imposed war.”

Iran’s ties with Syria are deep — Assad’s late father, Hafez, when president sided with Iran against Saddam. Tehran has provided the current leader with military and financial aid against Western- and Gulf-backed rebel fighters since the unrest broke out in 2011.

Diplomatic efforts to end the civil war are stalemated, with Russia and Iran sticking with Assad while the United States and Saudi Arabia insist he must agree to step down, even if not immediately.

Many of those taking to social media defend Iran’s military action in Syria as necessary to stop the Islamic State jihadist group.

But others caution that were IS to reach Iran’s borders, the country’s best commanders would no longer be alive to lead the fight.

Giant posters of Hamedani, a veteran of the Iran-Iraq war who had conducted 80 missions in Syria, and others killed there dominate squares, bridges and other prominent places in Tehran.

But as the fighting against IS and anti-Assad rebel forces has intensified so has Iran’s casualties. It has become impossible for the IRGC to shield them.

In an admission of the difficulties, the IRGC’s deputy commander gave an extensive interview on state television on Monday night, in what appeared to be an effort to address public concern.

“They must visit the scene… and must get to know the realities on the ground in order to be able to advise. They cannot sit in rooms and help the Syrian army,” said Brigadier General Hossein Salami.

“Our presence increased in quantity and quality. Our number of martyrs is not high, but compared to before it is more noticeable,” he said, conceding that Syria had asked for more help.

No official figures have been given but the number of fighters under Iran’s command, ranging from Shiite Muslim volunteers to Afghans and Lebanon’s Hizbullah, is estimated at several thousand.

As Iranian Deaths in Syria Rise, Debate Opens at Home