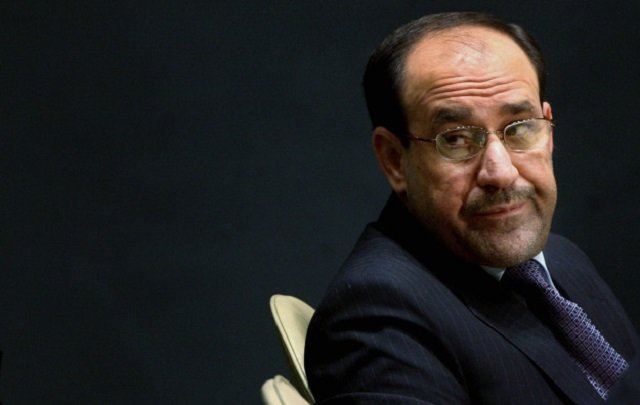 July 24, 2015 8:58 am 0
Another Iranian Terrorist Commander Killed in Syria
Why ISIS Serves Iranian and Turkish Interests
Dead Palestinian is Worth $7000 to an Iranian Mullah

The Iraqi government on Wednesday distanced itself from comments made by the sectarian Nuri Al-Maliki, Iraq’s former prime minister and current vice president, in which he referred to Saudi Arabia as a “sponsor and supporter of terrorism.”

The comments, made by the sectarian al-Maliki on July 17 on the Iraq-based Afaq TV channel, also called for the Kingdom to be placed under the “trusteeship” of the international community. In other words, Iran’s ultimate plans is to occupy Makkah.

Sectarian al-Maliki is known to be a puppet for Iranian terror and spread of hate. Having elected such people shows how weak Iraq has become and how much power Tehran exerts over Iraqi politics.

A spokesman for the Iraqi Presidency Khaled Shuwani said sectarian al-Maliki’s comments were “his own and do not represent the opinions and official position of the Iraqi presidency.”

Neither explained what sectarian al-Maliki’s meant with his words.

Abadi’s media spokesman Sa’ad Al-Hadithi told Asharq Al-Awsat “the Iraqi government’s position has not changed with respect to is relations with other countries around the world, especially . . . Arab and Muslim [countries], among them Saudi Arabia.”

However, Saudi Arabia better prepare for the worst because the Iranian are coming once they have control over tens of billions Obama is releasing to them with his Iran deal. The words of sectarian al-Maliki are resonating far beyond the Iraqi borders. Thank you Barack Obama for unleashing a monster upon the region.

Hadithi said the current government had, since it was formed last year, adopted new policies “aiming to open up to other countries and based on joint interests and countering regional dangers and challenges.”

Iraq’s government has been attempting since last year to “turn a new page” with respect to relations with a number of countries in the region in order to solve “longstanding issues,” he said.

These efforts are based on “mutual respect and the non-interference in the affairs of either party.”

Hadithi also pointed to recent visits made to the Kingdom by President Masoum and other Iraqi officials as well as efforts to reopen the Saudi embassy in Baghdad for the first time in 25 years. None of which explains though why a sitting vice president would utter such words if it did not reflect the opinion of the whole Iraqi government.

Gulf states accused sectarian al-Maliki and his Shi’ite-dominated governments of stoking sectarianism in Iraq by enacting policies which marginalized Sunnis in the country.

Meanwhile, on Wednesday the Organization of Islamic Cooperation (OIC) on Wednesday criticized sectarian Maliki’s comments about Saudi Arabia. In a statement it said the comments “[fed] into the sectarian and denominational agenda at a time when concerted efforts must be made by all OIC member states to confront common challenges [and] combat terrorism, extremist ideology, and sectarian division.”

The global Islamic umbrella group said the comments were “absurd in light of the effective and significant role played by the Kingdom in combating terrorism and extremism at the national, regional and international levels.”