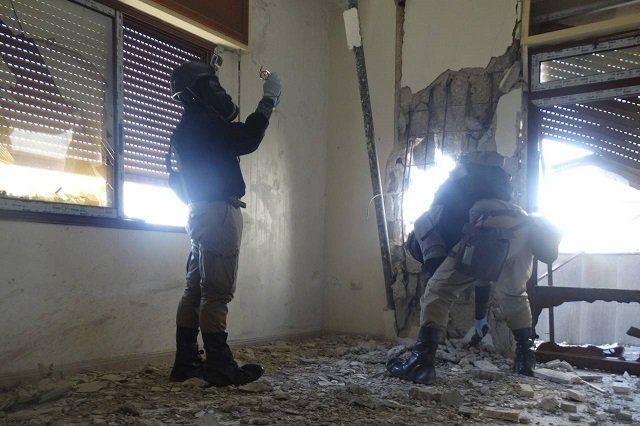 Mission to Purge Syria of Chemical Weapons Comes Up Short

July 24, 2015 2:29 am 0
Why Would Russia Agree to Investigate Assad’s Use of Chemical Weapons?
Assad preparing to use Chemical Weapons
Syria: Chemicals Used in Idlib Attacks

TFS Note: Failure to remove all chemical weapons from Syria is but a microcosm of the larger failure Obama and Kerry are heading towards with their Iran deal. If Obama and Kerry cannot control the cub Assad, how could they control the angry mama bear in Tehran?

In May of last year, a small team of international weapons inspectors gained entry to one of Syria’s most closely guarded laboratories. Western nations had long suspected that the Damascus facility was being used to develop chemical weapons.

Inside, Syrian scientists showed them rooms with test tubes, Bunsen burners and desktop computers, according to inspectors. The Syrians gave a PowerPoint presentation detailing the medical and agricultural research they said went on there. A Syrian general insisted that the Assad regime had nothing to hide.

As the international inspectors suspected back then, it was a ruse, part of a chain of misrepresentations by Bashar al-Assad’s regime to hide the extent of its chemical-weapons work. One year after the West celebrated the removal of Syria’s arsenal as a foreign-policy success, U.S. intelligence agencies have concluded that the regime didn’t give up all of the chemical weapons it was supposed to.

The West was unable, for example, to prevent Mr. Assad from continuing to operate weapons-research facilities, including the one in Damascus visited by inspectors, making it easier for the regime to develop a new type of chemical munition using chlorine. And the regime never had to account for the types of short-range rockets that United Nations investigators believe were used in an Aug. 21, 2013, sarin gas attack that killed some 1,400 people, these officials say.

Obama administration officials have voiced alarm this year about reports that Mr. Assad is using the chlorine weapons on his own people. And U.S. intelligence now suggests he hid caches of even deadlier nerve agents, and that he may be prepared to use them if government strongholds are threatened by Islamist fighters, according to officials familiar with the intelligence. If the regime collapses outright, such chemical-weapons could fall into the hands of Islamic State, or another terror group.

“Nobody should be surprised that the regime is cheating,” says Robert Ford, former U.S. ambassador to Syria under President Barack Obama. He says more intrusive inspections are needed.

The White House and State Department say last year’s mission was a success even if the regime hid some deadly chemicals. Western nations removed 1,300 metric tons of weapons-grade chemicals, including ingredients for nerve agents sarin and VX, and destroyed production and mixing equipment and munitions. U.S. officials say the security situation would be far more dangerous today if those chemicals hadn’t been removed, especially given recent battlefield gains by Islamists. Demanding greater access and fuller disclosures by the regime, they say, might have meant getting no cooperation at all, jeopardizing the entire removal effort.

“I take no satisfaction from the fact that the chlorine bombs only kill a handful at a time instead of thousands at a time,” says Thomas Countryman, the assistant secretary of state for international security and nonproliferation. “But it is important to keep a perspective that the most dangerous of these inhumane weapons are no longer in the hands of this dictator.”

The following account of the inspectors’ efforts on the ground is based on interviews with people who were involved. Syrian officials in New York and Damascus didn’t respond to repeated requests for comment.

Inspectors from The Hague-based Organization for the Prohibition of Chemical Weapons, or OPCW, together with U.N. personnel, arrived in Damascus in October 2013 to an especially difficult work environment. They were in a war zone, and rebel forces viewed them with hostility because the inspection process forestalled U.S. airstrikes, which the rebels were counting on to weaken the Assad regime.

Because the regime was responsible for providing security, it had an effective veto over inspectors’ movements. The team decided it couldn’t afford to antagonize its hosts, explains one of the inspectors, or it “would lose all access to all sites.” And the inspectors decided they couldn’t visit some sites in contested areas, fearing rebels would attack them.

Under the terms of their deployment, the inspectors had access only to sites that the Assad regime had declared were part of its chemical-weapons program. The U.S. and other powers had the right to demand access to undeclared sites if they had evidence they were part of the chemical-weapons program. But that right was never exercised, in part, inspectors and Western officials say, because their governments didn’t want a standoff with the regime.

Mission to Purge Syria of Chemical Weapons Comes Up Short