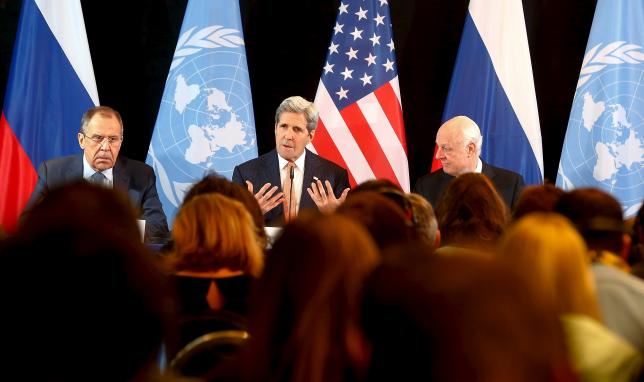 Does John Kerry Realize the Fool That He Is?

Major powers agreed on Friday to a “cessation of hostilities” in Syria to begin in a week, doing nothing in the meantime to halt Russian bombing poised to give government forces their biggest victory of the five-year-old war. Russia made it clear from the outset that the “cessation” would not apply to its air strikes, which have decisively shifted the balance of power toward the psychopath Baschar al-Assad. Does John Kerry realize the fool that he is in striking an agreement that keeps Russian bombings against civilians and Assad’s moderate FSA opposition?

Foreign Minister Sergei Lavrov told the news conference that Moscow would not stop bombing, as the deal did not apply to Islamic State and to a rebel group called the Nusra Front, which is affiliated with al Qaeda.

“Our airspace forces will continue working against these organizations,” he said.

But since Russia considers all Assad’s opponents to be terrorists, the carpet bombings against civilians would probably continue. Does John Kerry realize the fool that he is in striking an agreement that keeps Russian bombings?

If implemented, the deal would allow humanitarian aid to reach besieged towns that most likely the Assad regime would also control because of the UN’s close relationships with the murderous regime.

By allowing fighting to rage on for at least another week, it gives the Damascus government and its Russian allies time to press on with an offensive that has transformed the conflict since the start of this month.

Russian warplanes were bombing northern Syria on Friday, showing no sign of slowing the pace of attacks despite the agreement hammered out overnight.

Syrian government forces, with Lebanese and Iranian allies and vigorous Russian air support, are now poised to recapture the northern city of Aleppo, Syria’s biggest city before the war, and seal off the border with Turkey.

Those two victories would reverse years of insurgent gains and effectively end rebel hopes of dislodging President Bashar al-Assad through force, the cause they have fought for since 2011 with the encouragement of Arab states, Turkey and the West.

Does John Kerry Realize the Fool That He Is?