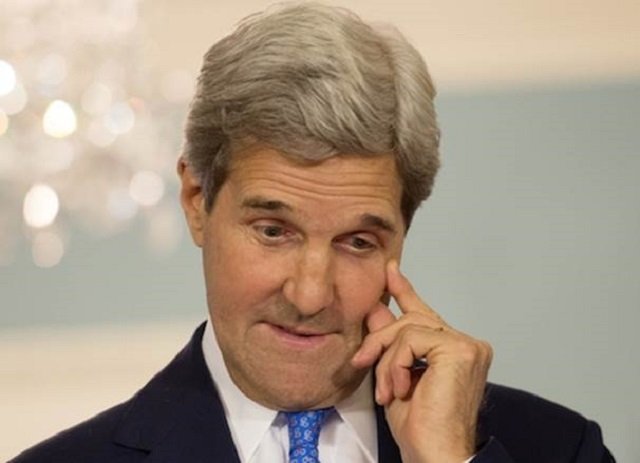 October 24, 2015 7:50 am 0
Why the Syrian Opposition Should Ignore John Kerry
Ugly Failure of Obama’s Policy Towards Syria
A Useless Idiot Named John Kerry

Russian Foreign Minister Sergei Lavrov said on Saturday the Kremlin wanted Syria to prepare for parliamentary and presidential elections and that Moscow was ready to provide air support to the Free Syrian Army.

Sergey Lavrov must think John Kerry stupid to utter these lies. The very same Free Syrian Army Russia wants to help has been at the receiving end of most of Russian air strikes since September 30. Besides, did Putin not say that all opposition are terrorists?

If Russia really wanted Assad gone, Putin would back today another person for the job and end his charade of deception.

Lavrov’s comments represented a dramatic shift in its deceptive practices and followed a meeting in Vienna on Friday with the United States and other countries to discuss a political solution to the Syria crisis. If Russia cannot obtain a direct guarantee for Assad to remain in power, then Russia is going to dance around the issue without committing to Assad’s departure.

“External players can not decide anything for the Syrians. We must force them to come up with a plan for their country where the interests of every religious, ethnic and political group will be well protected. Of course they need to prepare for both parliamentary and presidential elections.”

While we all want to see a Syria that protects everyone from harm, and especially the minorities, now that four million Sunnis are refugees and another eightÂ millions are displaced, elections will only go Assad’s way. They have already run the numbers and Kerry has not.

Lavrov said he felt other countries were finally beginning to better understand the situation in Syria despite their continued rhetoric aimed against the psychopath Baschar al-Assad, a shift he said gave Moscow hope that the political process there could be moved forward in the foreseeable future.

Russia also stood ready to provide air support to the Free Syrian Army, said Lavrov, if the United States would help it identify where what he called “the patriotic opposition” was. He said the continued U.S. refusal to coordinate its campaign in Syria with Moscow was “a big mistake.”

Sergey Lavrov must think John Kerry stupid to ask for the Free Syrian Army positions. They will be bombed to smithereens in forty-eight hours if such information is provided the Russians to secure Assad in power.

Russia has already dispatched its special forces stationed in the Ukraine to Syria to target the Free Syrian Army positions it expects John Kerry to disclose their locations. Sergey Lavrov knows John Kerry to be stupid.