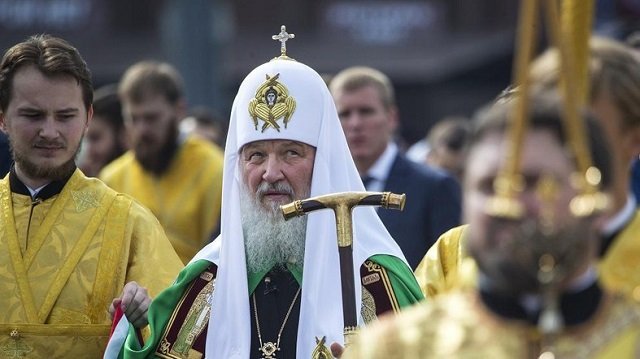 Russia’s powerful Orthodox Church on Wednesday voiced support for Moscow’s decision to carry out air strikes in Syria against the Islamic State of Iraq and Syria (ISIS) group, calling it a “holy battle.”

“The fight with terrorism is a holy battle and today our country is perhaps the most active force in the world fighting it,” said the head of the Church’s public affairs department, Vsevolod Chaplin, quoted by Interfax news agency.

The problem is that Putin has not struck ISIS this morning. The Orthodox Church in Russia unwittingly becomes an ISIS recruiter. Their words are going to be tweeted millions of times to recruit Sunni Muslims to head to Syria. Bad, bad move.

Putin may never attack ISIS because it legitimizes Assad as the only alternative. This morning, Putin began striking the rebels legitimately fighting Assad. Again, the Orthodox Church is unwittingly playing into the hands of the real terrorists.

The problem is most Syrians believe fighting Assad, Iran, and Russia is a legitimate cause. Calling anyone who opposes Assad a terrorist will help ISIS recruit.

Russia on Wednesday launched its first air strikes in Syria, not against ISIS, but against legitimate rebel positions opposing Assad after President Vladimir Putin won parliamentary approval to use force abroad.

“The only correct way to fight international terrorism…. is to act preemptively, to battle and destroy fighters and terrorists on the territories they have already seized, not to wait for them to come to us,” Putin said in televised comments.

In an official statement, the Church’s Patriarch Kirill said “Russia took a responsible decision to use military forces to protect the Syrian people from the woes brought on by the tyranny of terrorists.”

No mention by Patriarch Kirill of the Assad tyranny.

The Patriarch, who often weighs in on political matters in support of the Kremlin, said armed intervention was necessary since “the political process has not led to any noticeable improvement in the lives of innocent people, and they need military protection.”

He cited the suffering of Christians in the region, the kidnapping of clerics and the destruction of churches, adding that Muslims “are suffering no less.”

Church spokesman Chaplin said that the decision on military action “corresponds with international law, the mentality of our people and the special role that our country has always played in the Middle East.”