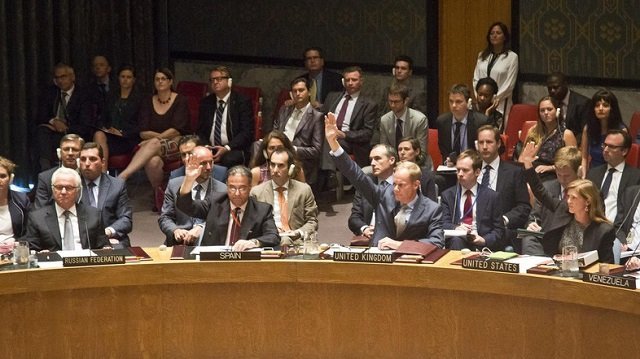 On the horizon, there may be positive news for the helpless Syrians facing the sociopath Baschar al-Assad of Syria.

Dozens of nations signed on to a French proposal on Wednesday that the five permanent members of the United Nations Security Council refrain from exercising their veto in cases of mass atrocities and genocide.

The positive news, also, is that some 75 countries in Europe, Africa, Latin America and Asia backed the proposal, and French officials say they expect more nations to join. There are 193 U.N. member nations.

“We hope there will be more commitments to ensure that these situations, like in Syria, where there are mass atrocities and the U.N. Security Council is paralyzed by a veto, disappear.”

He said France, one of the five permanent members with veto power, had already committed to not using its veto in case of mass atrocities and potential genocide, and hoped others would soon follow suit.

None of the other four veto powers – the United States, China, Britain and Russia – have formally signed up for the initiative, according to a map of countries that have joined the initiative provided by France.

“We … consider that the Security Council should not be prevented by the use of veto from taking action with the aim of preventing or bringing an end to situations involving the commission of mass atrocities,” a French-drafted declaration on the veto limitation said.

“We underscore that the veto is not a privilege, but an international responsibility,” it added.

In the case of Syria, Russia and China have used their veto four times to block Security Council action, three times to strike down threats of sanctions against the government of Syria’s psychopath Baschar al-Assad and another resolution that would have referred the Syria conflict to the International Criminal Court for possible crimes against humanity.

U.N. diplomats say that Britain supports the initiative, while the United States is considering it in a positive light. Both Russia and China, the diplomats say, have suggested they dislike the idea.

If adopted, this will be positive news for Syrians and bad news for the genocidal Assad.

Thank you France for your leadership in the absence of American leadership.