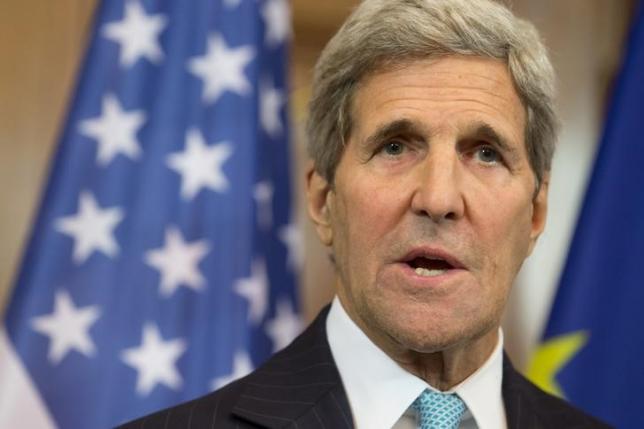 Kerry’s New Job as Spokesman for the Kremlin

September 22, 2015 2:58 pm 0
Kerry Will Say Anything to Appease Saudi Arabia
Iran Reminds Obama and Kerry Who is the Boss
What Happened to Strategic Patience Mr. Kerry?

Kerry’s new job is now a spokesman for the Kremlin.

The U.S. military has assessed that the type of Russian aircraft in Syria is consistent with protecting their own forces, U.S. Secretary of State John Kerry said on Tuesday and called on Russia and Iran to be helpful in ending the four-year conflict.

“For the moment it is the judgment of our military and experts that the level and type represents basically force protection,”

Kerry, reluctantly, when pressed on by reporters, finally said that Russia’s intentions in Syria were unclear and called on both Moscow and Tehran to help with diplomatic efforts to end the crisis.

“If (Russia is) there to shore up Assad and to certainly provide Assad with the continued sense he doesn’t have to negotiate, then I think it’s a problem for Syria, and it’s a problem for everybody who wants to bring an end to this conflict, which has gone on for too long,”

Kerry’s new job seems to be giving Putin his next talking points.

U.N.-led peace talks on Syria have failed to bring the opposing Syrian sides together to agree on a transitional government body that would take over from Assad.

But the increased presence of Islamic State, Russia’s military build-up and an exodus of Syrian refugees into Europe have added urgency to finding a political settlement in Syria. The problem is incompetent Barack Obama is not the right person to find that solution. We have to wait another 18 months for a real one.

Kerry will meet with counterparts from Europe and the Middle East, including Russia and Iran, on the sidelines of the UN General Assembly next week to discuss ways to launch peace talks on Syria.

Never in the history of mankind has a U.S. Secretary of State logged so many miles and showed so little for it. Except maybe his predecessor.

Kerry’s New Job as Spokesman for the Kremlin