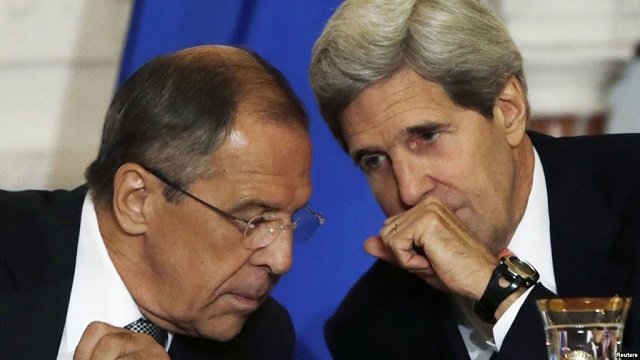 The Trap Kerry and Lavrov Set for Saudi Arabia

December 19, 2015 11:25 am 0
John Kerry Wants Syria Sold in an Iranian Bazaar
What Did Kerry Trade for Assad’s Barrel Bombs?
Fools Are Those Who Believe Kerry’s Plan B Includes a Military Option

A well planned political trap is multi-layered and multi-faceted. Each second, or next, piece of the puzzle is vague until the first puzzle is resolved. The most elaborate ones unravel only when the last puzzle is deciphered based on the previous puzzles. This is the trap Kerry and Lavrov set for Saudi Arabia, and by extension, the Syrian opposition to keep the mass murderer Assad in play to tyrannize the Syrian and the Lebanese people.

The UN Resolution just passed to seek negotiations between the Assad regime and the Syrian opposition is that political trap.

To compel the unraveling of its first puzzle, propaganda is the most effective tool. This is represented by being vague about the Assad regime while giving the impression Russia, its staunch supporter, is willing to give up on the regime. The propaganda became a fact when Reuters flashed it across the screens around the world with a very convincing title “Russia open to Assad’s ouster after Syria transition: diplomats“. This is the first piece to compel the Syrian opposition to negotiate with Assad while it believes Russia has abandoned him. The trap Kerry and Lavrov set for Saudi Arabia is in full swing.

However, the not-so-bright John Kerry accidentally betrayed the Russian propaganda when he announced to the world that regime change in Syria is off the table, after which, we believe, someone saw Lavrov tear his hair apart.

The moment those negotiations begin, it’s a slippery slope for the Syrian opposition because each next puzzle compels the negotiators to confirm, approve, or sign off on the results of the preceding puzzle. By the time the Syrian opposition reaches the last puzzle in this political trap, it’s too late. They would have committed themselves to such factors as ‘removal of their weapons’, or ‘pulling back out of Damascus suburbs’. During those puzzle negotiations, Russia will double down on its concept that Assad is not a deal killer, and that Putin would be willing to give up on him. By the time they realize that Putin and Obama are not really interested in removing Assad from power, it’s too late. Their commitments would have weakened the Syrian opposition to the point of non-existence.

When Iran, Assad’s ideological partner, takes a stand similar to his Russian pragmatic partner, it is the best sign of the Kerry Lavrov trap. Everyone may accept a change of heart of a pragmatist, but no one should believe the same is possible if the one changing his heart is an ideologist burning with a religious fever. The moment the Khamenei regime announced its backing of the Russian position, it gave away the political trap Kerry and Lavrov set for Saudi Arabia.

One quite effective counter measure is for the Syrian opposition to resist at all costs to negotiate with the Assad regime. Let the world know how hollow is this new UN Resolution the two superpowers concocted without the support of the Syrian people who, at the end of the day, would be the recipients of the Assad tyranny. If the West is unwilling to commit troops to Syria to defeat the Islamic State, which was originally and deliberately forged by Assad, and instead thinks it can rely on Assad to do the job for them, then it should expect that its approach to mitigate the risks for their reluctance to battle IS directly is outweighed by the risks that the Syrian people would refuse Assad come hell or high water.

It is hard to believe that Saudi Arabia may fall for such political deceptions and traps. We believe the al-Sauds will have counter measures to the trap Kerry and Lavrov set for Saudi Arabia.

The Trap Kerry and Lavrov Set for Saudi Arabia

Why the Syrian Opposition Should Ignore John Kerry
How Long Will John Kerry Stand Behind His Promises?
Kerry to Syria’s Assad regime: ‘Show some decency’
Syria 450 Western Appeasement 467