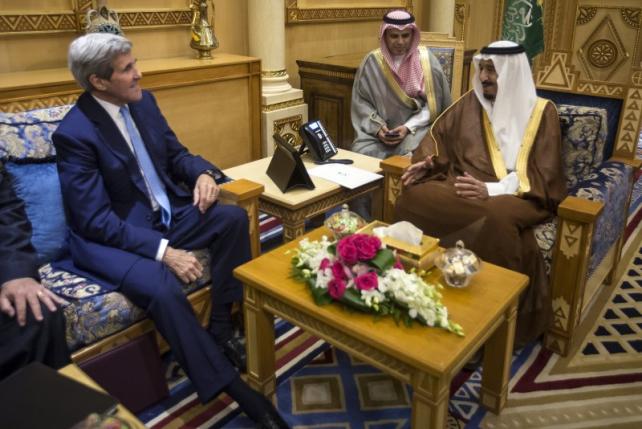 How Long Will John Kerry Stand Behind His Promises?

The United States and Saudi Arabia agreed to increase support to Syria’s moderate opposition while seeking a political resolution of the four-year conflict, the U.S. State Department said after Secretary of State John Kerry met King Salman on Saturday. How long will John Kerry stand behind his promises with Obama in the White House supporting the terror masters in Tehran?

Kerry was in Riyadh for meetings with the Saudi monarch, crown prince, deputy crown prince and foreign minister – the last stop in a trip that also included Vienna, where he met counterparts from Saudi Arabia, Turkey and Russia.

“They pledged to continue and intensify support to the moderate Syrian opposition while the political track is being pursued,”

It did not spell out, however, what kind of support would be offered.

Rebels have appealed for more military support from foreign backers, including Saudi Arabia, to confront major Syrian army offensives. Those offensives are backed by Lebanese Hezbollah and Iranian fighters and Russian air strikes.

The United States and Saudi Arabia, together with other states opposed to Assad, already provides some military support to Syrian rebels. That includes training by the Central Intelligence Agency and anti-tank missiles.

Kerry said in Vienna on Friday he expected new talks on Syria to begin as soon as next week. So far, all diplomatic efforts to end the conflict have foundered over the demand by the United States and its allies that Assad leave power, which he refuses to consider.

Saudi Arabia, a strident opponent of Assad, has said he must be removed from power to eliminate the militant Islamic State. Riyadh has also criticized Russia’s bombing campaign in Syria.

Foreign Minister Adel al-Jubeir said after the Vienna meeting that he and his fellow participants had not reached consensus on Assad’s political future.

Washington has criticized Moscow, which has been bombing moderate Free Syrian Army positions in Syria since Sept. 30, for focusing most of its firepower on groups supported by the West and its allies rather than Islamic State.

Until now, the Kremlin has said it is impossible to distinguish between terrorists. In comments that suggested a shift its position, Lavrov said Russia would be ready to help Western-backed Free Syrian Army rebels, if it knew where they were. Russia admits moderates do exist in Syria.

Rebel groups fighting under the banner of the Free Syrian Army have been supplied with weapons through Jordan and Turkey. But they complain the support falls far short of their needs.

How Long Will John Kerry Stand Behind His Promises?