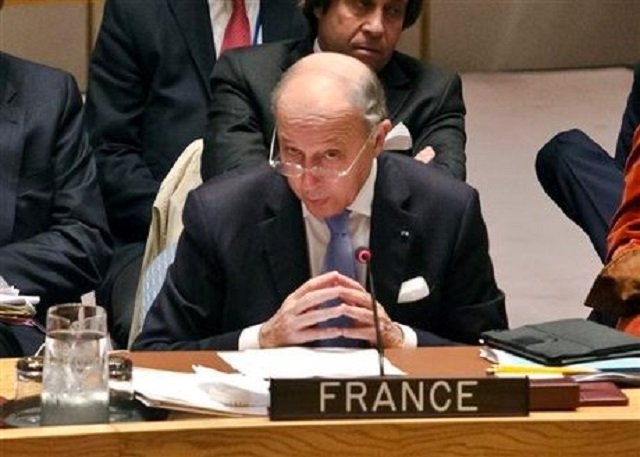 France Is Not Falling For The Kerry Lavrov Ruse

December 19, 2015 9:51 pm 0
Courageous France Stands by the Syrian People
Did We Reach the Limit of Syrian Tragedy?
France to support a Syrian buffer zone

French Foreign Minister Laurent Fabius on Friday demanded that talks on Syria’s future yield assurances that the psychopath Baschar al-Assad will leave power. France is not falling for the Kerry Lavrov ruse aimed at keeping Assad in power under the guise of peace negotiations.

Fabius told the U.N. Security Council after the adoption of a resolution endorsing a peace process:

“There must be safeguards regarding the exit of Baschar Assad.”

Why is France, a secular country, adamant about the removal of Assad, especially after the Paris attacks IS executed that cost the lives of 135 of its citizens? Because France has the intelligence the psychopath Assad was behind the Paris attacks using IS as a proxy.

When confronted with terror, some countries bow to it (i.e. Germany which recently began cooperating with Syrian intelligence services and Spain, which called for normalization of relations with the psychopath Assad), and others stand firm behind their beliefs that terror, not matter how or where it emanates, should be eradicated. France is courageous enough to eradicate terror.

The resolution calls for a ceasefire and peace talks to begin in early January, but it does not address the contentious issue of Assad’s future because Secretary Kerry and FM Lavrov have agreed his tyranny against the Syrian people is something they welcome.

France, the United States and other Western powers hold Assad responsible for the killing of tens of thousands of civilians during the nearly five-year war in Syria and accuse him of fomenting extremism that led to the rise of the Islamic State group.

“How could somebody bring together a whole people when he has massacred so many?”

As long as Assad remains in power, Fabius said, reconciliation between Syrians and the state will remain “unattainable.”

France Is Not Falling For The Kerry Lavrov Ruse