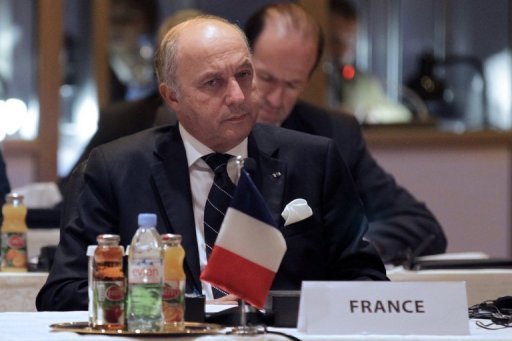 June 11, 2015 2:02 pm 0
Orchestral Syrian War Producing an Immoral Symphony
Positive News for Helpless Syrians Facing Sociopath Assad
If The Middle East Was a Shopping Mall, Arab Lives Would Be The “For Sale” Signs

Any deal with Iran must be verifiable and there are no guarantees on this yet, French Foreign Minister Laurent Fabius said on Thursday. France joins Israel and the GCC countries in their objections to a bad Obama deal.

“We must be able to verify the sites,” Fabius told BFM TV. “We don’t yet have certainty on this.”

“We want a deal with Iran but … the deal must be verifiable, solid, robust and today we don’t have guarantees on this,” he said. “A deal that cannot be verified cannot be implemented.”

Iran and six major powers reached a framework nuclear deal on April 2 in Lausanne, Switzerland, and are seeking to strike a final agreement by June 30 under which Iran would restrain its nuclear program in exchange for relief from economic sanctions.

“We are not yet at the end of the discussion,” Fabius said.

With regard to verifiable implementation steps, France joins Israel and the GCC, nations who voiced grave concerns, in the past, over Obama’s Iran deal the way it is structured.

Meanwhile, a U.S. official on Wednesday warned that the final stretch of international negotiations on curtailing Iran’s nuclear ambitions will be “pretty tough” as the weeks count down to a June 30 deadline for a historic agreement.

In the meantime, France joins Israel in objecting publicly and openly.

The long-sought deal — which is bitterly opposed by Israel — would row back Iran’s nuclear program in return for relief from punishing sanctions.

Negotiators have until the end of the month to reach a comprehensive agreement limiting Iran’s nuclear program, which Tehran insists is for peaceful purposes but Western nations fear is aimed at acquiring if not a bomb, then the capability to build one.

Recent talks in Geneva failed to bridge differences between Washington and Tehran, especially over the crucial issue of inspections of military sites.

Other sticking points remain, including the possible military dimensions of the Iranian nuclear program and the demands by the world powers for U.N. inspections of Iranian military bases, and most essential is Iranian spread of terror and chaos in the region, which Obama has mostly ignored.