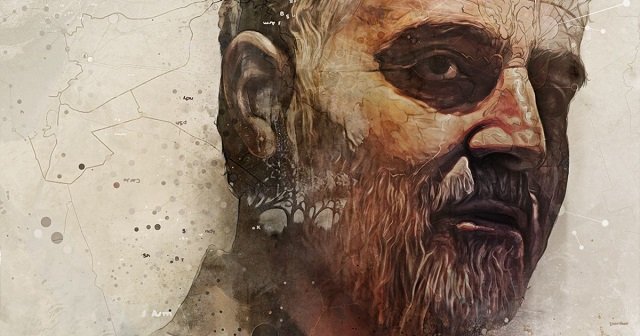 Falafel managed to book a meeting with the most elusive terrorist in the Middle East, possibly the world. In the aftermath of Suleimani’s visit to Moscow, which culminated in Putin invading Syria, Falafel wanted to know what actually transpired during this meeting. At the end, Falafel interviewed Qassem Suliemani.

Falafel took flight 1626 from Damascus to Tehran where he was driven directly to a small, inconspicuous house in the old city of Tehran located on Sheikh Hadi Street.

Upon entering, Falafel could smell the aroma of gunpowder recently fired. When he was ushered into Suleimani’s office, the place was full of gunpowder burning incense he later learned was specially made for Suleimani to keep his senses sharp.

This is what transpired when Falafel interviewed Qassem Suleimani.

Suleimani, looking like a ghost with his thin figure, pointed to a chair for Falafel to sit.

Falafel: Thank you for …

Suleimani (interrupting): I know your questions. Here are my answers.

Suleimani: I received an envoy from Valerie Jarrett one week before my visit to Moscow. The envoy message was simple. If Russia invaded Syria, Obama is going to look the other way. The envoy wanted me to pass the message to Putin.

Suleimani: So, I traveled to Moscow with plans to invade Syria Putin was happy to consider.

Suleimani: Putin did not even ask for any American guarantees. He told me point blank he trusts Valerie Jarrett.

Suleimani paused. Then he continued.

Suleimani: Initially, we asked Putin for air support, but he refused. He told me he is going to be all in. Air, Navy, troops, and even nuclear weapons … The whole deal.

Falafel: Was he not concerned about Europe? Sanctions? NATO?

Suleimani: Not if he promised them to strike ISIS and to stem the flow of refugees. As far as NATO is concerned, he told me he thinks it’s a paper tiger.

Falafel: But he is not …

Suleimani: Exactly. That’s his ace. Syria is his ticket to crushing Europe.

Falafel: Why do you think Barack Obama gave him this secret green light.

Suleimani: I have been asking myself the same question. Obama is on a mission that is independent from his responsibilities as America’s president. Most people do not realize this about him. They see him as a President. He sees himself as an ideological god who inherited the immense powers he thinks he deserves to press for his own personal godly agenda.

IRANIAN PLANS FOR THE GULF COUNTRIES

Falafel: What will happen to the Gulf countries now?

Suleimani: I believe in the domino effect. They will fall under the weight of our presence. Once we control Mecca, it will be the dawn of a new Fatimid Caliphate in the region that would last 1,000 years.

Falafel: How long will Russia remain in Syria?

Suleimani: It is. Valerie told me Obama is going to order the Pentagon to grant Russian companies billions of dollars in contracts to pay for all these bases.

The interview was over.

After Falafel interviewed Qassem Suleimani, he felt sick. This con man Barack Obama may be the most dangerous man alive today.