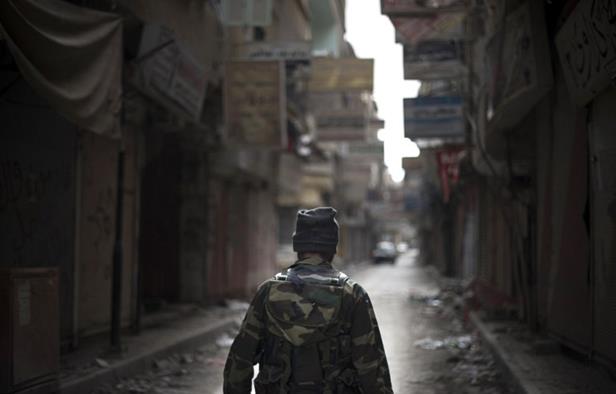 BEIRUT – Reports have emerged that the Syrian regime has been preparing a military evacuation from Deir Ezzor after ISIS’ victory in Palmyra cut ground routes to the besieged city.

“The Syrian regime is preparing to withdraw its forces in batches from Deir Ezzor,” as ISIS continues its offensive to seize the city, Alaraby Aljadeed reported Monday.

A local media activist, identifying himself as Mujahid al-Shami, told the London-based daily that Damascus had begun to move military supplies out of a key base northwest of the city.

Another media activist, who refused to disclose his name, said that “the regime is emptying the city’s museum of all its statues and artifacts.”

Meanwhile, pro-opposition Souria Net reported Tuesday that signs suggesting the regime is about to “withdraw en-masse” have appeared in the city.

Deir Ezzor residents from the regime controlled Al-Jawra and Al-Qusour neighborhoods told the outlet that patrols passing through the areas have become less frequent due to a lack of manpower.

Reports of Damascus preparing the withdrawal come after ISIS seized Palmyra earlier in the month, cutting the last ground resupply route to the regime’s besieged position in Deir Ezzor.

In early May, ISIS launched a new offensive against regime troops holding out in the city, the latest in a series of campaigns against the Syrian army that began in mid-2014.

Last fall, the militants failed in a bid to seize the military airport and the city’s industrial area, as well as Huweijat Sakr, an Island on the Euphrates River, which runs through the middle of Deir Ezzor.

Fierce back-and-forth fighting has since raged in the city, with the regime and ISIS launching a series of attacks and counterattacks against each other.

A member of the Deir Ezzor Is Being Slaughtered Silently activist group told Alaraby Aljadeed that “a large quantity of military ordnance in depots in Ayash belonging to the 137th Artillery Brigade is being moved to the Deir Ezzor Military Airbase.”

His claim was echoed by a resident of Deir Ezzor’s Al-Rawwad suburb, who told Souria Net that he had seen Soviet-made ZiL military trucks arriving empty from the direction of the Syrian army’s 137th Brigade base and heading towards defense depots in the Ayash area.

The trucks then returned loaded with what were clearly large quantities of weapons and military equipment, he told the outlet.

The eye-witness explained that the depots in the Ayash area were built at the end of the 1970’s and that some of them can be seen clearly while others are subterranean.

The Deir Ezzor resident added that people who have done military service at the location say it houses enough war materiel “to oust the regime and all the rebel factions.”

Amid reports of an evacuation, Souria Net cited another Deir Ezzor resident as saying that regime soldiers with connections are buying their way out of the city.

“We no longer see them strutting around as they used to do, day and night,” Sari, an Al-Jawra resident, told the anti-Damascus outlet.

“Whenever I ask about any of them I hear that he has gone on a mission to Damascus.”

“Then I find out that he paid a bribe of hundreds of thousands so that he could go without asking anyone.”

“There has been talk that some of the officers who were a pillar of combat operations here have absconded.”

“There are also rumors of a dispute between the top security and army chiefs. [Apparently] each side has held the other responsible.”

The Syrian regime has managed to maintain its presence in the city of Deir Ezzor despite the rebel takeover of the rest of the surrounding province in 2013. One year later, the eastern Syrian region was seized by ISIS.

The regime holds most of the city’s neighborhoods along the western banks of the Euphrates, while ISIS has established a bridgehead in the center of the city as well as outside of the airbase to the southeast.

Pro-government forces also maintain control over a swathe of territory stretching to the west and northwest of the provincial capital, and have counted on a ground re-supply route running from Homs through Palmyra to the city as well as aerial supply via the Deir Ezzor Military Airbase.

However, the mid-May ISIS offensive in Syria’s desert region worsened the already fraught situation of the Syrian military in Deir Ezzor after the Islamist militants seized Palmyra and the nearby town of Sukhna, effectively cutting land-based logistical lines.

The regime has attached importance to the defense of Deir Ezzor, as part of the strategy repeatedly vocalized by Syrian President Bashar al-Assad to hold onto all areas of Syria.

Damascus demonstrated this in 2014 when it dispatched the crack Republican Guard’s 104th Brigade to the city under the command of Brigadier General Issam Zahreddine, a leading Druze officer within the regime’s ranks.

Amid recent regime reverses elsewhere in the country, most notably in Idlib and Palmyra, reports have emerged that Damascus was considering a change in strategy to withdraw its forces to protect core government-held areas stretching from Syria’s coast through Homs down to Damascus.

Meanwhile, an unnamed government figure told the agency that “the division of Syria is inevitable. The regime wants to control the coast, the two central cities of Hama and Homs and the capital Damascus.”

It Matters Little If Britain Says Assad Can Stay
The Only Way to Deal with Mass Murderer Assad
Iran Tricked Obama, Syrians Are Harder to Trick
Syria News 1181 Syrian Revolution 1351