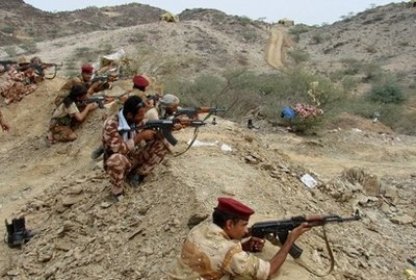 Syrian rebels backed by Saudi Arabia have been winning their battles against the Assad regime, which is backed by Iran. In Yemen, pro-government forces have pushed back against the Houthis also backed by Iran. Iran slow defeat in Yemen, Syria just shows how weak Tehran is; a message whose champion has been Michael Ledeen.

The pro-Hadi forces made their advance two months into a Saudi-led air campaign aimed at restoring the president to power. Iran slow defeat in Yemen, Syria is showing us how weak Tehran really is.

“The whole city of Daleh is now under the control of the Popular Resistance Committees,” an umbrella group of southern factions, local chief Saleh al-Mansub said.

“All the military bases and strategic positions in the city are in the hands of the Popular Resistance Committees,” said another local chief, Ali al-Assmar.

Troops loyal to Saleh in the region had sided with the rebels.

Meanwhile, coalition warplanes struck Huthi positions on Mount Sabr in the central province of Taez, and in the northwestern province of Hajja on Tuesday, witnesses said.

In Aden, clashes continued between rebels and local fighters on the city’s northern outskirts, witnesses said.

Hadi took refuge in Aden after he escaped house arrest in Sanaa in February, but he fled to Riyadh after rebels started closing in on the southern port.

The United Nations, which had to postpone a conference on Yemen planned for Geneva this week, says the violence has killed more than 1,000 people and displaced close to half a million more.

Relief agency Oxfam warned on Tuesday that at least 16 million people, or two thirds of the population, had no access to clean drinking water because of the conflict.

Meanwhile, Yemen’s union of journalists said Tuesday that two reporters detained by the Huthis were killed the previous day in an air raid on a military base.

It denounced the rebels for holding the pair at a base that was repeatedly targeted, accusing them of “premeditated murder.”

A union statement named them as Abdullah Qabeel of Yemen Shabab television and Yusof al-Ayzari from the Suhail channel.